Morocco World News
Home News Morocco Street life in a Casablanca suburb: Give it up, Mohamed…and come back... 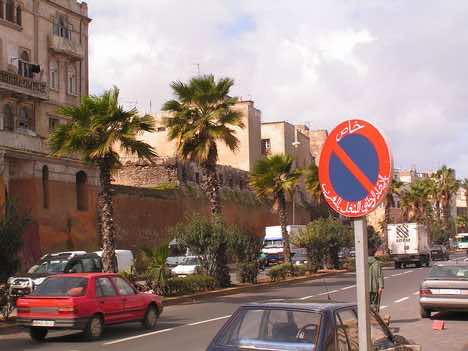 There are entire streets in Casablanca that don’t stink of piss. My humble “ruelle” is not one of them, sadly. Indeed once could argue that the mere whiff of urine is often diluted by other fragrances of the natural world, not to mention the industrialized one as Mohamed and his car body spray shop is just adjacent to my apartment block, and all manner of vomit inducing pong emits from their particular armpit of automotive innovation as about six guys bang, hiss and hum all day long on mangled motorcars.

The street is filthy, cluttered and overrun with some of the largest cockroaches known to feature on the National Geographic channel, many of whom pass through my bedroom at night on their way to my balcony, as though a sort of caravan route has already been etched out for them, to move on to greater things.

“It’s a dump this place, I don’t know why you live here” were the last words of Sanaa my fiancé who recently walked out on me after yet another fight over something really important – the kind of thing which you can’t even remember two minutes later – leaving me to my own devices in my third world flat. In fact, they weren’t her last words. Her last words were “t’es un con, et je suis crevee de…” – you get the picture.

I’m not going to cheapen the memory of the most precious woman to have ever loved me and to lower the standards of the integrity of this Website by cataloging my failed relationship with this adorable Moroccan Princess and certainly not her abusive ejaculation which trivialized my sexual performance. Oh, alright then.

Sanaa was terribly middle class and from Rabat. In Morocco this means hell for a European as there is so much to be proved to you from the one class in the Magreb that has a huge chip on its shoulder…about almost everything. This particular class of Moroccan lives in a fantasy world about their own standards, where the Oscar Wilde quote of “We are all lying in the gutter, but some of us are facing the stars” applies. They believe that their present circumstances of modesty are merely a temporary state of social malfunction and that any day now their father will buy the taxi company itself, relieving them of having to share the “petite taxi” with common people.

This particular class carries off style quite well. They have studied it from television and movies and have got it down to an art form – so much so that a fake pair of Ray Bans costing $5 actually appears to be the real thing as it rests on their perfectly sculpted European snouts. And may god strike you down if you were to buy a $5 fake pair of sunglasses for Sanaa and her class. The reaction on their faces will be akin to a puppy which has been kicked by its new owner. “You expect me to wear those cheap things? They will damage my eyes,” she said, locking the eyeline and looking at me almost like I had asked her to recite the first act of Macbeth, naked, while I throw chocolate digestive biscuits at her perfect breasts.

But since Sanaa walked out, the apartment feels larger, filthier and the street more third world than ever. The weekend before her departure, this tiny, yet adorable Arabian princess glided across the broken paving stones in my road and in a space of three minutes, holding my hand and keeping her head high, noted a lunatic walking past with a knife in his hand (which I didn’t spot), a dead rat in the gutter and then a stray dog having a shit. It was all too much for her, I think.

Or perhaps I was just all too much for her. My offhand remarks about Morocco clashed so violently with her own romantic view of her homeland and it just fouled up our partnership interminably it seems. Another golden rule in dating Moroccan women: Don’t ever talk about Morocco unless you are heaping praise on it.

But we now enter this period of “cleansing” ourselves in the two weeks leading up to Ramadan – a period marked in Casablanca by even more lunatic driving by maniacs in taxis and people breaking all previous records on public rudeness with glee. Europeans usually leave Morocco now. An exodus of expats leaving a sort of natural disaster zone, or a wobbly regime about to collapse is usually the sight at Mohamed V airport. Casa is hell during Ramadan as Moroccans have to give up the spoils of modern western life much more than their fellow Arabs across the region.

I was reminded of this not by my friends or neighbors but by the alcohol section of my local supermarket which has almost empty shelves where the beer used to be stacked. This means there has been a run on the beer. And like a good Moroccan, I followed suit in this tradition myself before returning to my humble pile of miserable apartment in my filthy street. But I have also been all too much for my neighbors who are all speculating that I am some kind of spy working for a foreign agency. Why would a European live in such a dump after all? Perhaps I don’t help the situation by occasionally being culturally insensitive to the neighbors’ sensibilities.

In fact, I think it was two Ramadans ago where an incident on my balcony perhaps sealed my fate. I was drinking a cold beer and smoking a cigarette singing along to a Sinatra song, while meandering my way through the apartment, clad only in a pair of cotton boxer shorts. Without thinking, I went out on to the balcony and at a given moment broke wind in what can only be described as an award winning fart which lasted several seconds and would have probably rattled the windows in a 100 meter radius – which was followed almost within a split second with an unsolicited belch. It was just one of those things.

But the second this European freak show had finished its trumpeting extravaganza, I looked up and saw the balcony to my left – a mere three meters from mine and slightly elevated — and a beautiful young girl of perhaps 19 or 20 years old, standing there in what appeared to be the flimsiest, wedding night gown which hung over her unsupported poitrine. Her mouth was aghast at my party trick. It was something she probably had never seen before not even on one of those satellite TV channels that asks for a secret code.

Perhaps three seconds passed before her mother quickly came out and shuffled her awkwardly back into the apartment rather like a Congolese mother hastily gathers her children when a rabid dog wanders into an African village.

I have never seen neither the mother nor daughter since that momentous day but regularly pass the father who nods the required acknowledgment. How does one apologize about such an abomination? Where are the cultural guidelines?

It’s a lost moment, something that cannot be re-captured. Like Sanaa.

(Michael Jay is a veteran foreign correspondent who has worked extensively in Europe, the Middle East and Africa for most major international TV networks. He can be reached on [email protected])