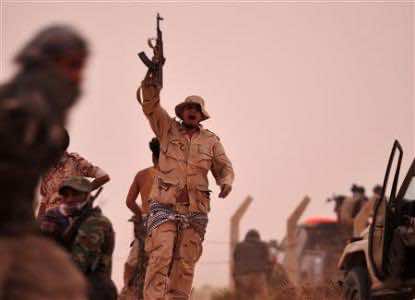 Heavy clashes between rebels and forces loyal to Muammar Gaddafi broke out on Saturday in Libya’s Western Mountains as insurgents sought to push toward Tripoli.

Sustained gunfire and volleys of artillery could be heard from the village of Bir Ayad, 15 km (9 miles) south of the front line at the town of Bir Ghanam.

Rebels at Bir Ghanam hold the high ground on the outskirts of the town, their closest position to the capital, Tripoli, about 80 km (50 miles) away.

Ahmed, a rebel fighter in Bir Ayad, said a convoy of about 15 vehicles from Gaddafi’s forces tried to approach Bir Ghanam, but the rebels fired at it and the convoy retreated after a about an hour of shooting.

“They were in a column at first but when we started firing they split into groups of three or four vehicles and all of them fled,” local rebel commander Fathi Alzintani told Reuters.

Rebels in the Western Mountains have made progress in recent weeks after repelling assaults by Gaddafi’s forces. Their next goal is Garyan, a town that controls the highway south from Tripoli.

But the rebels have been hampered by divisions, ill-discipline and supply problems.

In Brega, an oil port to the east that is controlled by pro-Gaddafi forces after having changed hands several times, 10 rebels were killed and 172 wounded trying to retake the town, Al Jazeera television reported.

In Misrata, the rebels’ main stronghold in the west, three rebel fighters have been killed and four injured in the past 24 hours, hospital staff said.

Away from the battlefield, Gaddafi has sought to demonstrate he enjoys widespread support in the areas he still controls. Libyan state television has broadcast footage of rallies attended by thousands of people in Tripoli and elsewhere.

Rebel leaders received a boost in their campaign to oust Gaddafi on Friday when they won recognition as the legitimate government of Libya from the United States and other powers.

Western nations said they also planned to increase the military pressure on Gaddafi’s forces to press him to give up power after 41 years at the head of the North African state.

Recognition of the rebels, announced by U.S. Secretary of State Hillary Clinton at a meeting in Turkey of the international contact group on Libya, is an important diplomatic step that could unlock billions of dollars in frozen Libyan funds.

The decision came as reports circulated Gaddafi had sent out emissaries seeking a negotiated end to the conflict, although he remains defiant in public.

In a speech on Friday evening broadcast as thousands of his loyalists rallied in street demonstrations, Gaddafi rejected international recognition of the rebels.

“Trample on those recognitions, trample on them under your feet,” he told his supporters. “They are worthless.”

He said he enjoyed the support of millions of Libyans who yearned for death, martyrdom and suicide.

The Istanbul conference attended by more than 30 countries and world bodies also agreed on a road map whereby Gaddafi should relinquish power and plans for Libya’s transition to democracy under the rebel National Transitional Council.

In Misrata, the head of the local council, Khalefa Zawawi, said the recognition was a boost for the rebel leadership.

China and Russia, which have taken a softer line toward Gaddafi, did not attend the contact group meeting.