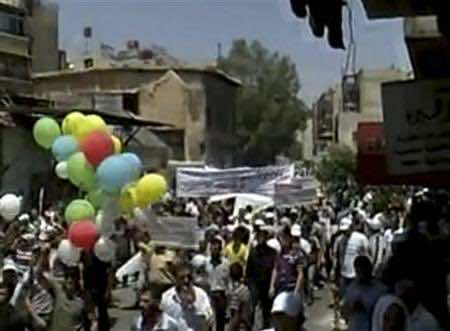 Syrians should wage a campaign of civil disobedience to try to force President Bashar al-Assad from power, an exiled dissident said on Saturday at a meeting in Turkey aimed at forging a united opposition.

The opposition, divided between Islamists and liberals, is holding a “National Salvation Congress” to try to unite behind the goal of ending 41 years of Assad family rule, but is struggling to agree on whether to form a shadow government.

“I’m for anything that unifies the Syrian people and helps our people inside, and unifies our ranks in confronting this illegitimate repressive regime that has usurped power and human rights,” opposition figure Wael al Hafez told the meeting in Istanbul, echoing comments made by others.

“We want to raise the intensity of the peaceful confrontation by civil disobedience and to choke the regime economically and paralyze the state with the least damage.”

The West has criticized Assad’s crackdown on four months of protests demanding political freedoms. On Friday, his troops killed at least 32 civilians, including 23 in the capital Damascus.

Secret police killed one protester and wounded five on Saturday when they opened fire at pro-democracy demonstrators in the eastern border town of Albu Kamal near Iraq’s Sunni heartland.

U.S. Secretary of State Hillary Clinton, visiting Turkey, said Friday’s protests in Syria had been the largest yet, and Assad’s repression was “troubling.”

“The brutality has to stop,” she said in a televised interview with a group of young Turkish people at an Istanbul coffee shop on Saturday.

Later at a joint news conference with Turkey’s Foreign Minister Ahmet Davutoglu, Clinton said: “Now Syria’s future is up to the Syrian people, but of course the efforts by the opposition to come together to organize and to articulate an agenda are an important part of political reform.”

She expressed hope that the people and Assad’s government could be reconciled to work together.

“It’s what the Syrian people are doing, trying to form an opposition that can provide a pathway hopefully in peaceful cooperation with government to a better future.”

Davutoglu repeated warnings to Assad’s government to implement reform or face being swept away by democratic forces.

“A government that does not consider the demands of its society won’t survive,” said Davutoglu, who had earlier urged Assad to undertake “shock therapy” reforms.

The opposition said security forces had targeted a wedding hall in Damascus where it had planned to hold a simultaneous conference, connected by video link to the one in Istanbul.

“Several martyrs are fallen and others have been arrested,” said Haitham al-Maleh, a former judge who was among political prisoners released by Assad in March when the uprising began.

“The regime cannot deny us our freedoms. This state is for the Syrians, not Assad family’s property,” Maleh told the meeting in Istanbul of several hundred people.

Most of his audience have lived in exile for years, if not decades, and many have paid a heavy price for their dissent in previous crackdowns by the ruling Baath Party. Unlike other meetings in recent months in Turkey, some members of the opposition inside Syria managed to attend.

Assad’s promises of reform have failed to quell the protests. Rights groups say some 1,400 civilians have been killed in the crackdown.

“My feeling is that the situation has reached a point of no return and the regime has also reached a point it cannot retreat after such a level of bloodshed,” said Hassan Najar, an exiled Syrian originally from Aleppo, now based in Germany.

“After 41 years, the question is how can you bring together a fragmented opposition? We have had only four months and what has been achieved is a miracle.”

The dissidents at the meeting appeared to fall into two camps — Islamist and secular liberals. Splits seemed to open among them over whether to form a government-in-waiting or wait to see how the uprising unfolds, and they could opt form a united body without presuming a leadership role.

“People are demanding that the opposition speed up unifying its efforts so that people deal with it as a credible alternative,” Ali Sadreddin Bayanouni, the former head of Syria’s Muslim Brotherhood told Reuters.