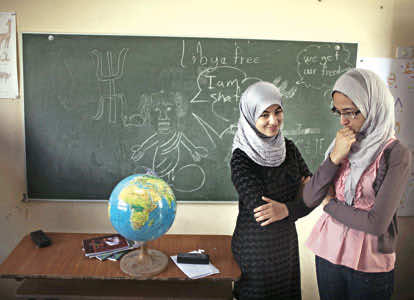 In a packed classroom on a cool evening near the front line in Libya’s civil war, 15-year-old Mira is teaching children to spell out the names of animals in the ancient Berber script, an act that once could have landed her in one of Col. Moammar Gadhafi’s jails.

The indigenous people of North Africa, known to others as Berbers and among themselves as Amazigh, were brutally suppressed under Gadhafi, who considered the teaching of their language and culture to be a form of imperialism in his Arab country.

They have become crucial supporters of the rebellion seeking to topple Gadhafi, with their stronghold in the Nafusa Mountains southwest of Tripoli emerging as one of the main fronts.

Berber was the main language of North Africa before Arabic arrived with the Muslim conquest in the seventh century. It is still spoken in the Sahara and in mountainous parts of Algeria, Morocco and Tunisia as well as Libya.

Activists say most of the Arabs of North Africa are in fact descended from Amazigh peoples, who were there before the arrival of Islam.

Today, the rebel-held town of Jadu, normally home to about 20,000 people – but now swollen with refugees from areas within shelling range of Gadhafi’s troops – has become the center for the rebirth of Amazigh culture and language. Shops have painted Amazigh signs above their doors.

For a few weeks, a radio station has been broadcasting from here in both Arabic and Amazigh, in what Berber activists believe are the first conversations in their language over Libyan airwaves in four decades.

An Amazigh publishing house has printed four books so far over the past month, billed as Libya’s first publications in the language since Gadhafi seized power.

The children study the Amazigh language at basic and advanced levels, as well as English, and sing songs in the courtyard. Their teachers learned Amazigh in secret from their parents at home.

Nearby is a museum, with local artifacts defiantly labeled in the once-banned script: items bearing the distinctive geometric patterns that Berbers say are part of their heritage.

Early in his rule, Gadhafi declared that anyone studying the Amazigh language was drinking “poisoned milk from their mother’s breast,” explained Fathi Anfusi, a 48-year-old Amazigh activist who escaped Tripoli and arrived in Jadu last month.

Gadhafi accused Amazigh activists of being on the payroll of Western intelligence agencies and seeking to divide the country. Berber activists were rounded up and jailed. The hero of their movement, a poet and journalist named Said Mahrooq, was paralyzed after being run down by a car. Giving children Amazigh names was also forbidden.

Anfusi, an agronomist by profession, wanted to name his daughter Tala, a Berber name meaning “fountain.” He was forced to register her with the Arabic name Hala instead.

They say they are united

Even the Berber name of the Nafusa mountain range was banned. On Gadhafi’s maps, the region is known only as the Western Mountains.

Gadhafi’s government still uses hostility to the Amazigh as part of its propaganda, warning Arabs in nearby towns that Berbers are coming out of the hills to attack them.

Inside rebel-held territory, Arabs and Berbers say they are united. Rebel units from Berber towns like Yefren and Jadu have been fighting side by side with units from Arab towns in the mountains, such as Zintan.

All fly the same pre-Adjani flag and profess similar goals of creating a democratic state.

But although they fight side by side, the units are still kept separate. When they captured the village of al-Qawalish last week, one of the first acts of the rival units was to hurriedly spray-paint the names of their Arab or Berber home towns on village walls.