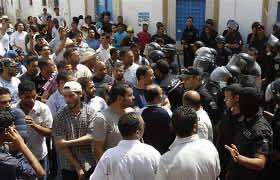 Tunisian police fired in the air and used teargas early on Sunday to disperse a crowd of about 200 people who had set fire to a police station in a suburb of the capital.

The clashes took place in the Intilaka district in the west of Tunis. A Reuters reporter at the scene said a police helicopter flew over the area.

Many of the people clashing with the police were bearded, indicating they were Islamists and said they were angered by an incident on Friday when, they said, police had fired teargas at a mosque in the centre of the city to break up a protest.

People in the crowd chanted “Allahu Akbar!” or “God is greatest!”. They also shouted “You attacked Islam!” and “We are not afraid of your police!”

Tunisians overthrew autocratic leader Zine al-Abidine Ben Ali in a revolution in January that electrified the Arab world and inspired uprisings in Egypt and elsewhere.

Since then the caretaker authorities, who say they are committed to dismantling Ben Ali’s repressive rule, have lifted a ban on Islamist parties and released hundreds of their followers from prison.