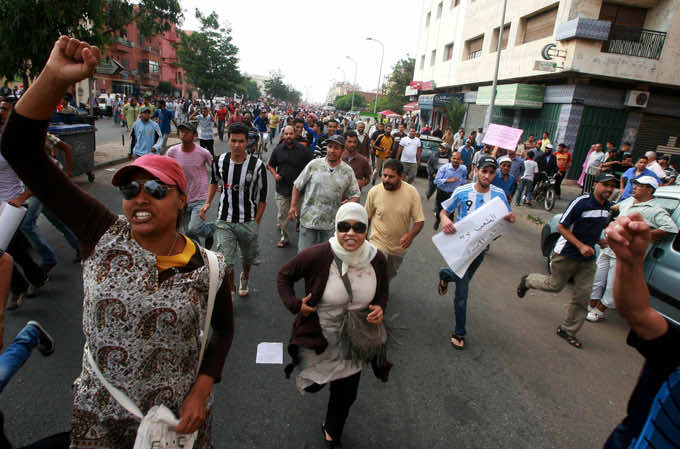 Both supporters and opponents of constitutional changes offered by Morocco’s king have protested in their thousands, indicating debate over the country’s future sparked by the “Arab Spring” uprisings has not ended.

Sunday’s opposition protests organised by the youth-based February 20 Movement took place in three cities and passed off without any clashes. The movement is a loose national network that was inspired by uprisings in Tunisia and Egypt.

The biggest show of strength by the opposition was in the northern city of Tangier where witnesses said about 12,000 marched to press the 47-year-old king for deeper reforms.

King Mohammed, a staunch ally of the West, is expected to hand over some of his powers to elected officials under a new constitution, which was approved in a referendum earlier this month.

But he will still retain a say over strategic decisions.

The move by the Arab world’s longest-serving dynasty is viewed in other Arab monarchies as a test case on whether reform can hold back the wave of uprisings sweeping the region.

A local elected official in Casablanca, the country’s commercial hub and biggest city, said rallies there gathered about 5,000 opponents and 1,000 backers of the reform.

The official MAP news agency said about 20,000 people marched in Casablanca in favour of the reforms. It did not mention protests by the opposition.

The government, and its Western allies, say the reforms are a landmark moment in Morocco’s move towards greater democracy and were endorsed by the vast majority of voters in the July 1 referendum.

Opponents say the king should relinquish more power and clean up government graft. They say the size of the “Yes” vote in the referendum was artificially inflated.

In the capital, Rabat, rallies for and against the reforms gathered close to 1,000 people from each side.

Led by dozens of Muslim clerics and students of Islamic schools, the backers of the reform chanted “We have one king, Mohammed VI!” Two of the students said they were bussed to Rabat from the southern Souss region especially for the protest.

Abdelkabir Belto, 19. “The local authorities brought buses for all the pupils of religious schools in Souss,”he said.

Opponents of the reform chanted slogans including “Majesty is for God only”, “Long live the people” and “Enough with corruption, you brought the country disgrace.”

The February 20 movement has not garnered the kind of support that overthrew longstanding leaders elsewhere in the Arab world, in part because the king is respected by most Moroccans, but it has generated Morocco’s biggest anti-establishment protests in decades.