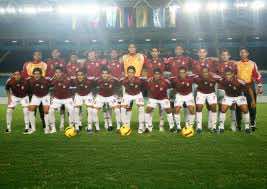 Venezuela reached the semi-finals of the Copa America for the first time on Sunday by beating Chile 2-1 in yet another quarter-final upset. Left-back Gabriel Cichero scored their winning goal nine minutes from time, stabbing the ball home from close range after Chilean keeper Claudio Bravo had parried a Juan Arango free kick. Centre back Oswaldo Vizcarrondo had given the Venezuelans the lead with a header in the 35th minute, also from an Arango freekick, before Humberto Suazo equalised for Chile in the 70th minute. Both teams ended the match with 10 men, Chile’s Gary Medel and Venezuela’s Tomas Rincon sent off in the closing minutes.

Venezuela will face Paraguay in Mendoza on Wednesday for a place in the final.

Long regarded as one of the weakest teams on the continent, their best previous finish at a Copa America was fifth in 1967, the year they made their Copa debut. Their victory completed a remarkable set of quarter-final results. Argentina, Brazil and Colombia had already fallen at the same stage, and Chile had been fancied to win. Venezuela deserved their half-time lead, if only for the dogged way in which they knocked the Chileans out of the stride, preventing them playing the neat, fluid football that had characterised their earlier performances. But after the break, Chile turned up the heat.

They hit the crossbar twice, first through Suazo, with a shot on the turn, and then, four minutes later, through Jorge Valdivia’s fierce shot from the edge of the box. After 70 minutes, Suazo finally found a way through. Alexis Sanchez fed the ball through to him and Suazo crashed his shot in off the underside of the crossbar. The match looked to be there for Chile to take and they pushed forward in search of a winner. But with 10 minutes to go, Arango curled a free kick into the box, Bravo parried it and Cichero poked it home, silencing 20,000 Chilean fans in the stadium in San Juan.

This was only Venezuela’s second victoy over Chile in 22 meetings between the two sides.