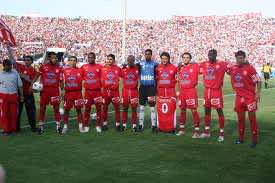 Morocco’s Wydad Casablanca held six-time champion Al Ahly of Egypt to a 3-3 draw as the African Champions League group stage opened with ties in every one of its four games.

Wydad—which only earned its place in Group A after defending champion TP Mazembe was disqualified for an ineligible player—claimed a valuable away point with Mouhssine Iajour’s late equalizer in Cairo on Sunday.

Earlier Sunday, Al Hilal of Sudan drew 2-2 at Enyimba of Nigeria in Group B with two goals from Zimbabwe striker Edward Sadomba.

The eight-team group stage kicked off on Saturday with Algerian team MC Alger’s 1-1 home draw with 2010 finalist Esperance of Tunisia in Group B.

Saturday’s Group A match between Raja Casablanca and Coton Sport of Cameroon ended 0-0 in Morocco.