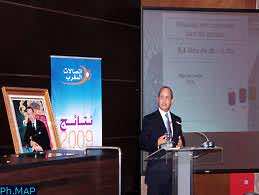 The Moroccan government said on Monday it wants to cuts its 30 percent stake in Maroc Telecom to as low as 23 percent by selling the shares through the Casablanca bourse, Reuters has reported today.

The finance and economy ministry said in a statement that on Sept. 7 it would open bids it had received by financial firms to advise and lead the sale of up to a 7 percent stake in Maroc Telecom. It did not say when it expects the transaction to be completed.

The stake is worth 8.86 billion dirhams ($1.10 billion) based on Maroc Telecom’s closing stock price on Friday.

This announcement came as Morocco is, once again, witnessing a steep increase of its trade deficit. Morocco’s trade deficit jumped 24.5 percent in the first half of the year from a year earlier to 93.2 billion dirhams fuelled by higher oil and wheat import bills, according to official data cited by Reuters on Monday