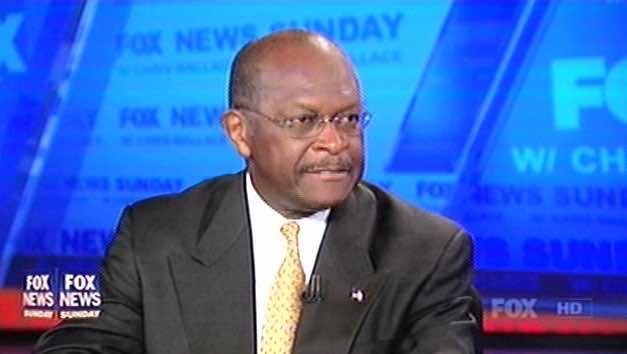 GOP Presidential hopeful Herman Cain is taking his efforts to win Republican votes by disparaging Muslims to the level of performance art.

Cain reiterated his opposition to a mosque in Murfreesboro, Tennessee yesterday on Fox News Sunday. Cain insisted that Islam is different from other religions because “fact Islam is both a religion and a set of laws, Sharia law.”

CAIN: They could say that. Chris, lets go back to the fundamental issue that the people are basically saying they’re objecting to. They’re objecting to the fact Islam is both a religion and a set of laws, Sharia law. That’s the difference between any one of our other traditional religions where it’s just about religious purposes. The people in the community know best, and I happen to side with the people in Murfreesboro.

WALLACE: You’re saying any community, if they want to ban a mosque?

CAIN: Yes. They have a right to do that. That’s not discriminating based upon religion.

Cain’s ignorance on the subject of religion and constitutional law is so vast it’s hard to know where to begin. For one thing, Islam is hardly the only religion to have its own laws — based on Cain’s arguments, Jews Catholics and Anglicans among others would also not qualify for religious protection under the First Amendment. The First Amendment protects the free exercise of religion, it does not sanction discrimination based on the religious prejudices of a given moment.

There is no one static set of precepts Muslims agree upon that Cain can refer to as “sharia law.” Sharia is a set of Islamic principles whose application varies based on interpretation. Ironically, by implying otherwise, Cain is insisting that the most draconian interpretations of sharia are the “real” ones, Cain is supporting the religious arguments of Islamic extremists. Cain argues that it’s not “discriminating against based upon religion” for a community to ban a mosque, which is absurd on its face. Cain is saying it’s not discrimination to discriminate.

The most pathetic part of Cain’s argument however, is his insistence that “the people in the community know best.” Most people in Tennessee support or are indifferent to the mosque, only 28 percent of those polled last year opposed it. But even if the community were overwhelmingly opposed to the mosque, that wouldn’t justify discriminating against Muslims, anymore than popular support for segregation in the 1960s American South would have justified discriminating against blacks. Cain recently opined that President Barack Obama isn’t a “strong black man” like Martin Luther King Jr. Does Cain truly believe that the MLK Jr, who referred to Islam as one of the world’s “great religions” and fought his entire life against the idea that “local control” somehow trumps the fundamental rights of individual minorities, would have supported a ban on mosques?

It was the first President of the United States however, who said that America gives to “to bigotry no sanction, to persecution no assistance.” Those words were more aspiration than fact when George Washington, himself a slaveowner, wrote them. But today, they are among the most basic principles any presidential candidate must uphold. Cain doesn’t even appear to want to uphold them.