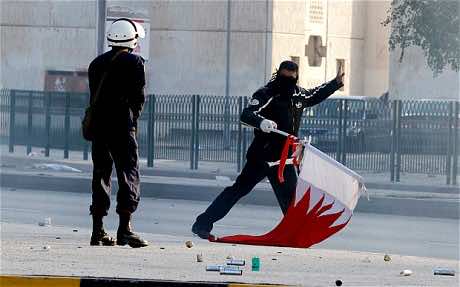 The King of Bahrain’s attempts to restore his Island’s reputation afetr a bloody crackdown on opposition pretests are crumbling from political attack and repeated allegations of police brutality even from members of the island’s middle classes.

The government’s National Dialogue, its forum for negotiation with opposition groups, lay in tatters yesterday after al-Wefaq, the biggest party in parliament, announced it intended to pull out.

Meanwhile, two of the most prominent figures detained in the crackdown have described to The Daily Telegraph a routine of beatings they suffered while in captivity.

One, Ayat al-Qurmezi, a 20-year-old trainee teacher jailed for a year for reciting poems critical of the king, said she was telephoned on Saturday by police to warn her against repeating her claims.

The other, a senior surgeon at the main Salmaniya Hospital, who has asked not to be identified, said the behaviour of the authorities had alienated the non-political middle classes like himself. He was one of 48 doctors put on trial in the wake of the protests, 20 of whom remain in custody.

He said he was hit round the head, kicked and beaten with a rubber hose until he was forced to confess to inflicting the wounds suffered by protesters he was treating for their injuries, or making them worse.

“I used not to be interested in politics,” he said. “I always kept away from it, because that was the advice of my father. But now I have been at the centre of a story I could never have imagined possible I think everybody should know about our story. So now I am full of politics.

“We were an upper middle class group of people – doctors, lawyers. So they have created a new sort of opposition.”

Most of the protesters involved in demonstrations in February and March were from the island kingdom’s Shia Muslim majority. The royal family, which occupies all senior positions of government, is Sunni.

The government claimed the opposition was stirred up by Shia Iran, and was exacerbating sectarian hatred. It says the National Dialogue, which involves the government, political parties and non-governmental organisations represents the only way in which the country can “come together” and solve its problems.

But al-Wefaq claimed that membership had been drawn up in a way calculated to marginalise Shia groups. It had 35 out of 300 seats, despite winning 18 out of 40 seats in parliament in elections last year.

Miss al-Qurmezi, who was granted early release from prison on Thursday, said the dialogue was a “sham” while protesters like herself were jailed for speaking their minds. She said she had been expelled from teacher training college for taking part in the protests – one of thousands of government employees and students similarly punished.

“I think it’s for show,” she said. “We know our government. They don’t do what they say.”

The crisis in the island, whose economy depends on its role as a business hub and home of the US Fifth Fleet, has severely damaged international confidence.

While security fears have died down with the crushing of the protest movement, human rights groups have started to apply pressure.

Human Rights Watch, in a report released on Monday, accused the government of a “campaign of retribution”, saying 70 medical staff in total had been detained, many had been tortured, and 150 sacked or suspended from their jobs.

The surgeon who spoke to the Telegraph claimed that Salmaniyah Hospital was now suffering a severe shortage of well-qualified doctors.

Isa Abdul Rahman, a spokesman for the National Dialogue, said it would continue even though al-Wefaq’s role had been “central”. “It is sometimes harder to stay and help shape the solution than to walk away,” he said.

The government has responded to accusations of brutality by setting up an international panel of inquiry, which has been welcomed by human rights groups including Amnesty International. It has also moved the doctors’ trial from a military tribunal to a civilian court, but it has refused to drop charges.