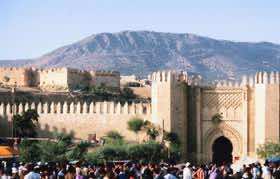 The coherence and modernity of the society project implemented by Morocco mirrors the art of all possibilities in the Arab-Muslim world, said Martin Schultz, chairman of socialist and democratic group at the European Parliament following a meeting at the royal cabinet with HM the King’s Advisor André Azoulay.

Accompanied by the members of his delegation as well as Eneko Landaburu, head of the EU delegation to Morocco, Schultz added that the talks confirmed his own evaluation of the exemplary and exhaustive aspect of comprehensive reforms carried out by Morocco.

Azoulay underlined that this working session was an occasion to highlight the new and basic elements that shape the institutional and political landscape “while giving our country the historic opportunity to foster its regional leadership in a mutating area.”

HM the King’s Advisor recalled the strategic importance of “the Euro-Mediterranean partnership which is directly impacted by the evolution of the situation in our region”, whether it concerns the changes under way or the urgent nature of relaunching the peace process in the Middle-East.