Morocco World News
Home News Morocco Change in Morocco: What’s Clinton Got to Do with It? 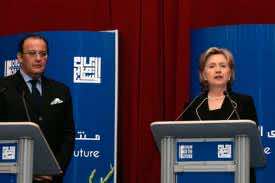 Democracy is defined as “government by the people; a form of government in which the supreme power is vested in the people and exercised directly by them or by their elected agents under a free electoral system;” so just end the democracy debate in Morocco already.  Morocco is a Kingdom where the buck starts and stops with the King. There is complete agreement between the recently passed new constitution and the previous one.  Granted, the current King is “cool” but that does not make the system democratic; at least not in the classical sense.

Initially, it was perplexing to defend the new constitution as a guarantee towards more democracy.  What is amusing, however, is to rely on the supporting opinions of world leaders and politicians to make such a case.  Figures cited include Hillary Clinton, U.S. Secretary of State, and Nicholas Sarkozy, President of France.  Doing so is bemusing nowadays.  What is overlooked is that the international community is as happy with the current constitution as it was with the previous one.

As a response to popular protests sparked by the Arab Spring, Morocco’s King Mohamed VI called for the drafting of a new constitution. On face value, this is an effort to applaud but the devil is in the details.  A few months after the announcment, the new constitution had been drafted. Less than two weeks after that, it passed in a referendum with over 98% voting in favor.   That served as more fuel for voices of dissent to cry foul.  Opinions are more polarized.

Opposition to the new constitution point out its many shortcomings and the questionable referendum process.  They argue that the process was rigged at many levels, from voter registration to what was tantamount to coercion of citizens in rural areas to vote yes.  The list of complaints and grievances is substantial, with varying degrees of legitimacy.

Proponents, on the other hand, argue that it goes far enough and that it may be more democratically advanced than the constitutions of some European democracies, citing Spain as an example.  They further point to the welcoming of world leaders of such developments as a clear indicator that Morocco is on the absolute right path. When the United States Secretary of State, Hillary Clinton, issued her statement about the constitution, proponents interpreted that as a strong endorsement and clear proof that the process is legitimate. Clinton’s statement read:

The United States welcomes Morocco’s July 1 constitutional referendum. We support the Moroccan people and leaders in their efforts to strengthen the rule of law, raise human rights standards, promote good governance, and work toward long-term democratic reform that incorporates checks and balances. We look forward to the full implementation of the new constitution as a step toward the fulfillment of the aspirations and rights of all Moroccans.

Soon after the statement was released, she was quoted in many articles supporting the referendum’s results, be them on web portals or social networking sites, e.g. Facebook.  The same occurred with statements by the King of Spain, the U.N. Secretary-General and others.  What many seem to forget is that Morocco is a sweetheart when looked at through the lenses of the rest of the world.  It always agrees to dialogue and is never a source of any serious trouble or concern, one of its kingdom’s more clever traits.  The international community is dealing with the situation in Morocco quite appropriately from its perspective: If it is not broke, don’t try to fix it.

The current commotion in the Arab world is an internal matter not an external one.  What matters the most is what happens inside and not outside.  A metric of success or failure relies on internal indicators and not external ones.  The Arab spring is not about French president Nicholas Sarkozy but about the twenty-something year-old who holds a college degree and has no job with a hopeless future. It is not about U.S. Secretary of State Hilary Clinton but about the mother who has no money to bribe a hospital employee in order for her sick kid to get medical attention, and the list goes on…

*Jamal Laoudi is a Moroccan national. He received a Bachelor’s of Science in Computer Science and a Bachelor’s of Art in Economics.  He is employed with the Adelphi Research Laboratory and serves as an independent consultant in Computational Linguistics.   He contributes to various news and community portals including Aljazeeratalk.net, Moroccoworldnews.com, and wafin.com.