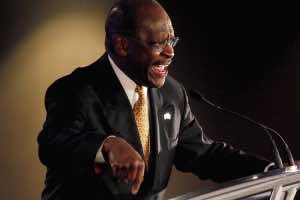 In the past week, Herman Cain has made two statements that take all of his previous Islamophobic statements to a level of real concern.  He is so blinded by his hatred of Muslims that he is ready to throw the Constitution out the window in order to make certain that they are kept in their place.

On Thursday, 7/14, Cain said that an effort by local Muslims to build a large mosque in Murfreesboro, TN is an attempt to “sneak” Shariah law into the fabric of the U.S. legal system.  “I think it is an infringement and abuse of our freedom of religion, and I don’t agree with what’s happening here because this isn’t an innocent mosque,” Cain told reporters after speaking to a crowd of hundreds on the Murfreesboro Public Square.  “This is another way to sneak Shariah law into our laws, and I absolutely object to that.”

On Sunday, 7/17, Cain said that communities should be able to prevent the construction of mosques in their neighborhoods.  “Our Constitution guarantees separation of church and state. Islam combines church and state,” Cain said on “Fox News Sunday.” “They are using the church part of our First Amendment to infuse their mosque in that community and the people in the community do not like it, they disagree with it.”  When asked by host Chris Wallace if any town could “then say we don’t want a mosque in our community?” Cain responded “they could say that.”  He further stated that “the people in the community know best.”

I would like to know how my local community (for example) building a mosque would infringe on Herman Cain’s (or anyone elses) freedom of religion?  I would also like to know when it became possible for the people in the community to decide who will or will not be protected by the Constitution?

This is not surprising coming from the same man who has already earned a place in the GOP Anti-Muslim Hall of Fame.  Previously Cain:

1— said  “The role of Muslims in American society is for them to be allowed to practice their religion freely, which is part of our First Amendment. The role of Muslims in America is not to convert the rest of us to the Muslim religion. That I resent. Because we are a Judeo-Christian nation, from the fact that 85 percent of us are self-described Christians, or evangelicals, or practicing the Jewish faith. Eighty-five percent. One percent of the practicing religious believers in this country are Muslim.    And so I push back and reject them trying to convert the rest of us. And based upon the little knowledge that I have of the Muslim religion, you know, they have an objective to convert all infidels or kill them. Now, I know that there are some peaceful Muslims who don’t go around preaching or practicing that. Well, unfortunately, we can’t sit back and tolerate the radical ones simply because we know that there are some of them who don’t believe in that aspect of the Muslim religion. So their role is to be allowed to practice their religion freely, just like we should be allowed to practice our religion freely, and not try to convert the rest of us.”

Cain is fearful that even though Muslims are only 1% or less of the population of the U.S., nevertheless he must “push back” against any possible attempt by that 1% to convert “the rest of us”.  Even if everyone of us went out and started going door to door, I doubt if we could increase that 1% by very much in the foreseeable future.  He must think that we are all better than any salesman that ever lived.  At least he believes that there are “some of them” who aren’t out to convert or kill him and the “rest of us”.

Dean Obeidallah, went to the streets of NYC with his fellow Arab-American comedians Aron Kader and Maysoon Zayid to see if they could recruit Americans to Islam. They offered prizes to people to convert to Islam, such as a toaster, a blender and even Sudoku. Here is a clip of their efforts to convert Americans!  Maybe this is what scared Herman Cain so badly.

He also thinks that the role of those few non-radical Muslims is to “be allowed to practice their religion freely”.  How kind.  I had always thought that the Constitution of the United States granted that right to all Americans, whether Herman Cain wants to “allow” them that religious freedom or not.  Those uppity Muslims need to be reminded to stay in their place and accept that we will let them know what we will allow them to do.

The First Amendment of the Constitution states Congress shall make no law respecting an establishment of religion, or prohibiting the free exercise thereof; or abridging the freedom of speech, or of the press; or the right of the people peaceably to assemble, and to petition the Government for a redress of grievances.
2 — Cain also said that Muslims have no place in the U.S. government.
3 — Cain upped the ante, not only defending his comments, but expanding on them.  Cain was asked if he believes a Muslim can be loyal to the Constitution.  “They could be,” Cain said. “But I haven’t done any surveys to find out how many Muslims are loyal to the constitution. But I don’t know any Muslims who will subvert sharia law for our laws. That’s the problem I have. And I don’t have time to do the research to find out. I’d have a country to run.”  He said  “Many of the Muslims, they are not totally dedicated to this country, they are not totally dedicated to our Constitution. Many of them are trying to force Sharia law on this country.”   So, not only can most Muslims not really be trusted, but Cain now wants Muslim government appointees to take a special loyalty oath.

The same Constitution that guarantees freedom of religion as a right, rejects any religious test for public office.  Such a test would be forbidden by OUR American Constitution.  In the New Hampshire GOP debate on 6/13 he repeated this idea of a loyalty test for American Muslims.
3 — Cain accused Rep. Keith Ellison of putting Sharia law over American law.  Cain said “If you take an oath on the Qur’an, that means you support Sharia law. I support American law. Our laws were derived from principles that are biblically based. Maybe not said in the same words that are in the Bible, but our laws are derived from principles based upon the Bible. This is why I’m not going to back down or pander to anyone who wants to call me xenophobic or a bigot simply because I said no. I don’t want anybody in my administration that I’m going to have to be looking over my shoulder to figure out if they are going to try to do something against the principles that I believe in which are also the principles that the majority, the overwhelming majority of the American people believe.”

This shows his remarkable lack of knowledge about not only the Constitution, but the basic functioning of the government.  Keith Ellison took the same oath and was sworn in exactly the same way that Herman Cain was, and no one in Congress or the Senate is sworn in on the Bible, the Qur’an, or any other religious text.  Such texts are only used for the photo op after the actual swearing in ceremony.  Once again, Cain puts those uppity Muslims in their place.  Do they want to participate in OUR democratic system, and even be elected to public office.  Perhaps, that might be allowed as long as they do it within what Cain defines as their proper place.  Obviously, Ellison went beyond what Cain is willing to allow.
4 — Cain said on the Laura Ingraham program that he has “never met a Muslim who didn’t fit his definition of a radical  —  and in the same interview, he alleged that Rep. Keith Ellison (D–Minn.), who’s Muslim, has pledged his loyalty to Allah, not the Constitution.

Article 6 of the Constitution states The Senators and Representatives before mentioned, and the Members of the several State Legislatures, and all executive and judicial Officers, both of the United States and of the several States, shall be bound by Oath or Affirmation, to support this Constitution; but no religious Test shall ever be required as a Qualification to any Office or public Trust under the United States.
The current oath of office for Congress and the Senate is the following I do solemnly swear (or affirm) that I will support and defend the Constitution of the United States against all enemies, foreign and domestic; that I will bear true faith and allegiance to the same; that I take this obligation freely, without any mental reservation or purpose of evasion; and that I will well and faithfully discharge the duties of the office on which I am about to enter: So help me God.

Both Herman Cain and Keith Ellison took this oath, and have sworn their loyalty to the Constitution.  If Cain has some personal evidence that Keith Ellison has done something against that oath, then he needs to bring charges against him, or sit down and shut up.

5 — Herman Cain speculated that Barack Obama ‘jeopardized’ the Osama bin Laden mission.
I wonder what other parts of the Constitution Cain feels are not worth defending?  I also wonder when other candidates will speak out against this sort of bigotry.  At this point, their silence is deafening.

If Cain is really serious about any of this anti-Constitutional, anti-American, anti-Muslim nonsense, then I really have to wonder what he is putting in his pizza.

All the views and opinions expressed in the article are solely those of the author and do not reflect those of Morocco World News.