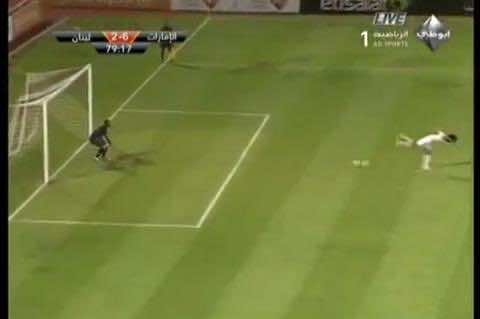 DUBAI– A United Arab Emirates footballer may be punished for a back-heel penalty kick made when his team was already 6-2 up in a friendly against Lebanon, The National newspaper reported on Tuesday.

Clips on video-sharing site YouTube that have notched up hundreds of thousands of views show Theyab Awana jogging towards the ball in Sunday’s match, but spinning to face away from the goal at the last minute and scoring with a backwards kick.

“This should not have happened,” the Abu Dhabi-based The National daily quoted team manager Ismail Rashed as saying. “I think what happened is disrespectful.

Rashed said team officials would meet soon to decide if Awana, who was on a substitute but was replaced straight after his 78th-minute penalty, will now face a penalty of a different kind.

“We could send him away from the team. We could make him pay a fine,” he said, adding that Awana “is very sorry. He said: ‘I did wrong. I made a mistake’.”