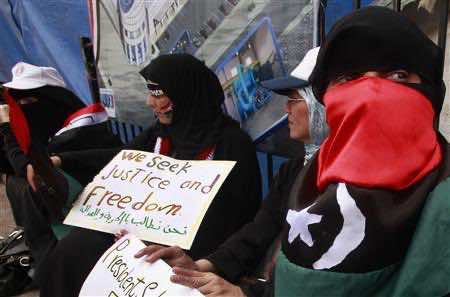 Yemen’s mainstream opposition coalition said on Tuesday it would set up a “National Council for the Forces of the Revolution” to lead efforts to oust President Ali Abdullah Saleh and end months of violence.

The Joint Meeting Parties (JMP) made the decision just days after youth groups and activists who have been at the forefront of six months of pro-democracy protests formed their own 17-member “transitional council” in a bid to force out Saleh.

The formation of two interim councils could further splinter Yemen’s opposition in the fractious Arabian Peninsula country where Saleh, who survived a bomb attack in June, is clinging to 33 years of power.

A popular uprising against 69-year-old Saleh began in January and fighting between government forces and opposition supporters has taken place in a number of parts of the country, including the capital Sanaa.

The unrest in Yemen is being closely watched by global powers because the country borders the world’s biggest oil exporter Saudi Arabia.

Mohammed al-Sabri, a JMP spokesman, said members of the national council would be announced within two weeks.

“It will be a framework for all political parties … The aim is to achieve the goals of the revolution and overthrow the rest of this regime,” he said.

Many street protesters are wary of the JMP, which was once part of Saleh’s government.

“Their council doesn’t add anything new for us,” said Abdullah Mohammed, an activist in Sanaa.

Tens of thousands of protesters across Yemen, who have camped out for months to demand Saleh’s ouster, have grown increasingly frustrated at their inability to remove him.

The United States and Saudi Arabia, both targets of foiled attacks by Yemen-based Al Qaeda in the Arabian Peninsula, have tried to lessen the turmoil by pressing Saleh to accept a transfer of power plan put forward by Gulf Arab countries.

Saleh, who has been in Saudi Arabia for treatment for severe burns he suffered in the June attack, has stopped short of signing that plan three times in the past few months.

Several cities in southern Abyan province have been seized by militants who the army says are linked to al Qaeda.

The military, backed by armed tribesmen, has so far failed in a four-day operation to retake Abyan’s capital Zinjibar.

Saleh’s opponents have accused him of letting his forces ease up in the south to stoke fears in the international community that only he stood in the way of a militant takeover in Yemen.

He has vowed to return to Yemen to lead a dialogue with the opposition and oversee a transition, a plan critics say is a stalling tactic.