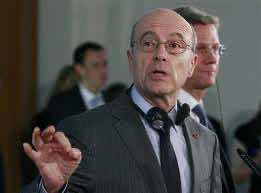 Muammar Gaddafi could remain in Libya if he relinquished all power, French Foreign Minister Alain Juppe said on Wednesday.

Juppe, asked during an interview on LCI television whether countries involved in the Libyan crisis could consider letting Gaddafi remain as part of a way out of the crisis, replied:

“One of the scenarios effectively envisaged is that he stays in Libya on one condition which I repeat — that he very clearly steps aside from Libyan political life.

Two members of Libya’s rebel Transitional National Council were due to meet French President Nicolas Sarkozy in Paris on Wednesday. France was the first country to publicly recognise the council and first to launch air strikes against Gaddafi’s military machine when now NATO-led operations began in March.