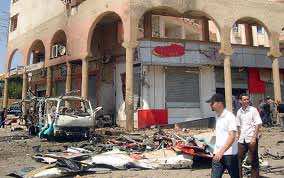 Al Qaeda in North Africa has claimed responsibility for suicide bombs in Algeria at the weekend that a security source said had killed at least two people, the SITE online monitoring service said on Tuesday.

It said al Qaeda in the Islamic Maghreb (AQIM) said it had carried out two suicide bombings in Bordj Menaiel, a town 70 km (45 miles) east of the capital Algiers.

SITE said AQIM made the claim in a communiqué with Tuesday’s date posted on online jihadist forums.

A local security source who did not want to be identified told Reuters that two people died when a suicide bomber targeted a police headquarters in the town. One of the dead was a police officer. Several other police were seriously wounded.

There has been no official confirmation of the attack.

Al Qaeda’s north African branch frequently attacks security forces in rural areas of Algeria, but it has been months since there have been any bombings in the centre of a town.

AQIM said in its communiqué that it had carried out two coordinated suicide bombings at the police station in the town on Saturday, killing 15 security forces.

It said these attacks followed two bombings by AQIM fighters in Baghlia town on July 13 and 14.

Algeria, an energy exporter in North Africa, is still emerging from nearly two decades of conflict between security forces and Islamist militants that, at its peak in the 1990s, killed an estimated 200,000 people.

In the past few years the violence has been reduced significantly, but the militants — who now operate as AQIM — still carry out ambushes, kidnappings and occasional bombings.

Bordj Menaiel is in the mountainous Kabylie region, where AQIM has its headquarters for northern Algeria, and where many of the attacks are concentrated.