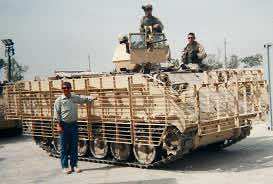 Various types of equipment and ammunition were delivered to Morocco on June 30 at the Casablanca Port as a result of two Excess Defense Articles foreign military sales cases originating from the Army Security Assistance Command.

Because EDA are no longer needed by the U.S. military, they can be sold via FMS or grant transferred to certain eligible FMS countries. EDA is provided on an “as is, where is” basis with the packaging, crating and handling, transportation, refurbishment and support costs being the responsibility of the recipient.

The recent shipment to Morocco included various types of vehicles, equipment, trucks, trailers, various types of rounds and many different types of ammunition and is valued at more than $400,000. Morocco is one of the largest customers of the United States government for excess defense articles.

“Morocco is very knowledgeable of our EDA system and utilizes it frequently to obtain the equipment and ammunition they require for their military for little or no cost to them,” Scott Huther, USASAC Moroccan country program manager, said.

EDA enables the U.S. to meet many of its foreign policy objectives while simultaneously supporting U.S. partners and allies in improving their defense capabilities. Sales of EDA may also reduce storage, transportation and demilitarization costs associated with keeping EDA at U.S. Army depots.

Huther said the equipment and ammunition assisted Morocco in getting the required ammunition and vehicles they needed at a significantly reduced price while strengthening the regional partnership.