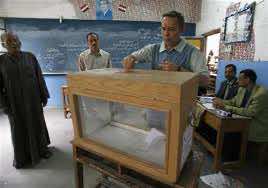 Major General Mamdouh Shaheen, a member of the ruling military council, held a press conference to announce the new law of elections.

Major General Shaheen said that Parliament will be comprised “of 504 members chosen by public elections. Half of the seats will be elected through the single winner system and half by list-based candidacy.

He explained that the number of representatives elected for each governorate through the list-based system must equal the number elected through the single winner system.

Most of the political parties favor list-based candidacy which they argue encourages citizens to elect representatives based on political platforms rather than on tribal or familial connections.

Regarding logistics of upcoming elections, parliamentary elections will take place in stages to make it easier for monitors to oversee voting, said Shaheen.

He announced that the upcoming parliamentary elections will take place in a three-stage process. This covers both houses of Parliament: the upper Shoura Council and the lower ‘People’s Assembly.’

Every two stages will be separated by a 15-day spell, during which the replay stage will take place. Appeals would be heard by court within 90 days after the results are announced.

Egyptians will be able to vote with their national ID.

Half of the 504 seats in the lower house will be contested only by workers and farmers.