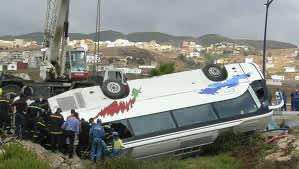 At least 14 people were killed and nine others seriously injured on Thursday when two vehicles collided in southern Morocco, the official MAP news agency reported.

The accident happened near the city of Ouarzazate, in the mountains near Marrakesh, just a day after seven people died in a crash in the northeast of the country, it said.

There was no indication that foreigners were involved in the latest accident.

Authorities have introduced harsher fines and sanctions, breathalyser tests and high-tech speed cameras to curb road accidents that cost Morocco an average of 10 lives a day and up to an estimated 1.5 percent of gross domestic product.