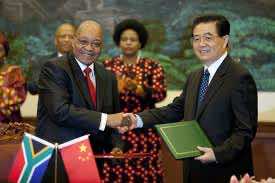 Turkey and the African Union have proposed separate road maps aimed at establishing a ceasefire and moving through stages from Muammar Gaddafi quitting power to a democratic transition. .

“South Africa and the African Union have played an important role in pushing a political solution for the Libyan issue, which shows the resolve of African countries to ‘use an African method to solve an African issue,'” Hu told Zuma.

“China greatly appreciates this, and is willing to continue remaining in close touch and coordinate closely with South Africa and the African Union on the Libya issue.”

Hu also told Zuma that China calls for an immediate ceasefire and a solution to the Libyan crisis “through dialogue and consultations”, Xinhua reported.

While China did not use its veto in March to block a U.N. Security Council resolution that authorised the NATO bombing campaign against Libya, it then quickly condemned the strikes and has repeatedly urged a ceasefire and compromise between the government and rebels.

China has recently met both Libyan government and rebel representatives, and Beijing has said this is part of an effort to encourage a negotiated end to the fighting.

But by courting the Libyan rebels, China has departed from its usual reluctance to entangle itself so deeply in other nations’ affairs.

But about half of China’s crude oil imports last year came from the region, where Chinese companies have a big presence. Beijing mobilised navy ships and civilian aircraft to help tens of thousands of Chinese workers flee Libya earlier this year.

France said on Wednesday that Gaddafi could stay in Libya if he gives up power, signalling a new effort to find a diplomatic solution to a five-month-old war that has failed to oust the resilient leader.