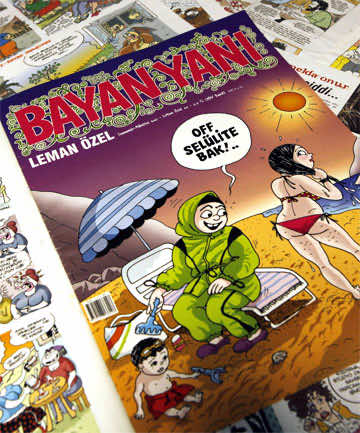 A man stabs a woman in broad daylight in the middle of the street. “He is killing her!” “Don’t do it!” “Call the police!” a group of passers-by scream, rushing to the woman’s rescue.

“You won’t divorce me!” the attacker shouts as he viciously plunges the knife into the woman. The passers-by suddenly turn their back on the couple. “Family matters,” they say walking away. “None of our business.”

The scene – not uncommon in Turkey – is a vignette in Bayan Yani, a Turkish woman’s satirical magazine that tackles taboo issues with a mix of social criticism and acid humour.

Launched in March and produced by women cartoonists and women writers only, Bayan Yani has made a splash confronting uncomfortable topics such as “honour” killings, women’s rights, sex, adultery and Islam, and with occasional irreverent glances at lighter fare such as weight loss or cellulite.

“This magazine has taken a huge step,” Elif Nursad, a 31-year-old artist who makes psychedelic drawings, mostly inspired by cats and the female body, told Reuters.

“Other comic magazines in Turkey depict women as sex objects to increase circulation. We came together and formed something we didn’t expect to be so successful. Turkey is a fast-consuming society and it’s open to new things. Bayan Yani is a completely new discourse.”

Bayan Yani means “the seat next to the woman’s seat” – referring to a Turkish convention on long-distance coaches under which a woman travelling alone is not seated next to a man.

The monthly magazine, which has a budget of $30,000 ($NZ35,039) per month, has a circulation average of 50,000 copies – a high number in a country where newspaper readership is normally low.

Nursad said she was leery of working for a woman’s magazine, but says she has never had so much freedom as in Bayan Yani.

Muslim Turkey is often held as an example by democracy activists in the Middle East and in North Africa, where ‘Arab Spring’ revolts are shaking the pillars of the establishment and in some countries such as Egypt and Tunisia have ousted leaders.

But women’s activists in Turkey, who have been boosted by Ankara’s prospects of European Union accession, say more progress is needed to improve their role in Turkish society, economics and politics.

Although women in Turkey have had the vote since 1934, their participation in politics and company boards remains low, and rights groups say cases of domestic violence against women and girls are alarmingly high.

“As years go by, one may think women are liberated, but the truth is they are being more and more imprisoned,” said Nursad.

“Women in Turkey are shinier, more colorful, more vivid and varied but at the end of the day the basis of the society is made up of men. Women are in display like mannequins on a shop window, the high heels, mini-skirts … It’s a more dangerous form of discrimination.”

The 20-women strong staff at Bayan Yani said they were mocked by their male counterparts in Turkey’s lively comic scene when Bayan Yani hit the stands. One male cartoonist who works for another humour magazine asked if the magazine’s staff consisted of “women who can’t get an orgasm.”

But they say men also read Bayan Yani, albeit secretly.

“Some of our male readers have asked us that we change the name of the magazine because they were too shy to buy it or to read it in public,” said Raziye Icoglu, 45, who writes a humorous column for the magazine.

A ceramics artist, Icoglu said she started working for Bayan Yani after divorcing her cheating husband.

“Women in Turkey are so desperate for help that they hope for help even from a monthly magazine,” said Icoglu, who credits the magazine for lifting her from the “the bottom of a well”. “That’s what being a housewife feels like.”

She said the magazine works as a support group for women.

“Two issues ago I wrote a piece on divorce and I received emails from women saying they were going through the same thing. Women can be united. People thought we couldn’t make it, but it’s the fourth issue of the magazine that you’re reading.”

Under Prime Minister Tayyip Erdogan’s socially conservative AK Party, Turkey has become one of the fastest growing economies of the world and a rising regional power admired by Muslim countries from Morocco to Saudi Arabia.

Erdogan’s government has relaxed rules against a ban on women’s headscarves at university – long seen by some as discriminatory against religious women. But some critics fear Turkey is falling behind on gender equality under AK, which evolved from banned Islamist movements and espouses a socially conservative agenda.

The only female cabinet member of Erdogan’s new government, announced this month, is in charge of family and social policies; there are only 67 women lawmakers in the 550-seat parliament.

A Human Rights Watch report in May said Turkish women have been left vulnerable to “extreme brutality” by family members because of poor enforcement of domestic violence laws.

A 2009 survey by Turkey’s Hacettepe University found around 42 per cent of women aged over 15, and 47 per cent of rural women, had experienced violence at the hands of a husband or partner at some point in their lives. Only 8 per cent of them sought help.

The staff at Bayan Yani, who wear jeans, smoke and do not use headscarves, say they have never received threats because of their work. The only male contributor to the magazine is the editor, who they describe as very supportive.

Despite the issues they tackle, they do not see Bayan Yani as a only-for-women magazine.

“It’s very natural that the main issues we touch upon are women issues. You draw what you live,” Nursad said.