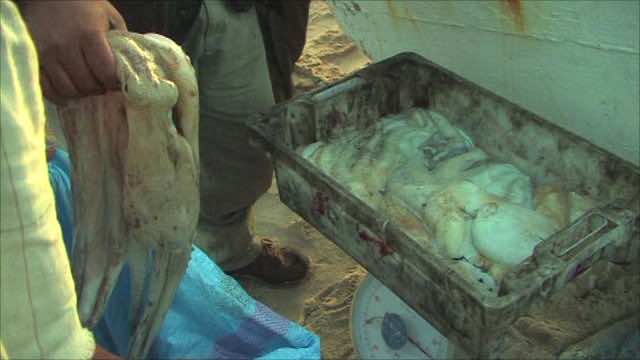 Dakhla, Morocco–It is about six in the afternoon, just before sunset, when hundreds of small boats are being dragged up onto the beach in a fisherman’s village in southern Morocco.

The fishermen’s catch, contained in black buckets, is not tuna, or bream, or even bass as one might expect.

Instead, they have caught an even more expensive, blue-blooded ocean-dweller that is lifting their home town Dahkla out of its financial problems.

The town lies at the tip of a peninsula, with the Atlantic ocean on one side and a bay on the other.

The calm waters in the bay contrast sharply with a recent crisis that killed millions of octopuses thousands of miles away, following the Gulf of Mexico oil spill.

Last year’s oil spill in the Gulf of Mexico may have been an unprecedented environmental disaster, but across the Atlantic, it turned into a boon.

With the global supply of octopus down due to fishermen in the Gulf of Mexico catching less, fishermen here now enjoy higher prices as the more voracious of the world’s octopus eaters turn to this seaside resort for their stocks.

The slimy, cephalopod, which has part of its brain in its tentacles, is an acquired taste not widely eaten in Morocco.

But Spain and Japan have set up companies in partnership with Moroccans to export the delicacy.

Growing demand from those countries has resulted in higher wages for the fishermen, with their artisan methods for collecting octopuses.

“We go out in our boats before dawn and to drop the buckets overboard near rocks,” says Abdul Hak Lemdaine, who originally comes from Casablanca.

“Then we collect the buckets at about this time every day. It is a hard life, but we don’t disturb the ocean bed. Everything is natural.”

These methods are in stark contrast to the huge international vessels dredging the oceans’ beds for whatever they can net further offshore, polluting the waters and disturbing sea life.

But the small-scale methods are bringing rewards.

Once the tangled tentacles have been sorted out and the catch transferred into blue plastic bags, Abdul Hak takes his octopuses to the collection centre a stone’s throw away, set up as part of new Moroccan maritime legislation passed in 2010.

Along with quotas to safeguard stocks, Abdul Hak is aware, as he dumps his bags onto the scales, further vetting required by the Office National des Peches (ONP) could dictate that fishing stop for the coming months.

But today Abdul Hak is in luck.

He has a sizeable catch, there is a clutch of keen Spanish buyers, and when the samples are cut open, only a few of the females have large numbers of eggs.

“We are more than happy with the quality, but production needs to increase dramatically to keep prices down.”

Mr Fernandez will be having the octopuses he has bought driven back to northern Spain in refrigerated lorries.

With the wholesale price peaking at more than eight euros (£7) a kilo, Hossein Ben Moussa, director of Friocondal, is employing more staff to clean, pack and freeze the octopuses.

“We are pleased that our quality is so highly thought of,” he says.

“Spain buys 80% of our quota because the Mexican spill has killed off that source of octopus.

“But our second biggest client is Japan. Morocco needs foreign currency, so this creature is really helping put Dahkla back on its feet.”

The foreign companies, which have offices in Dahkla, pay local taxes and employ hundreds of staff.

But the octopus catch is down from a million tonnes about 10 years ago, so the problems started well before the Gulf of Mexico crisis last year.

“The temperature in oceans throughout the world has risen,” Mr Hossein says.

“The octopus is sensitive to these changes. If conditions aren’t conducive it doesn’t reproduce. The chemoreceptors on its suckers make it vulnerable to changes.”

For the connoisseurs, the quality of Dahkla’s cephalopods make it the most sought after octopus, but this extraordinary creature with rotating eyes, three hearts and no bones may yet find adverse ocean conditions hamper its reproduction.

Although scarcity is only likely further to whet appetites for the delicacy.