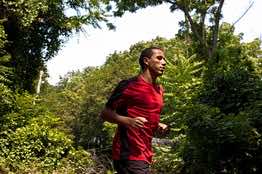 SLEEPY HOLLOW, N.Y.—Khalid Khannouchi can go for quiet jogs on the tree-lined trails in the Rockefeller State Park Preserve and get lost. There are miles and miles of loops, and he finds himself recapturing the familiar feeling he once enjoyed as one of the best distance runners in the world. “A good feeling,” he said.

The adrenaline-fueled drive is still there for Khannouchi, a former world-record holder and four-time winner of the Chicago Marathon. But his career has been derailed by injury. He last completed a major event in 2007, when he placed seventh in the U.S. Olympic Marathon Trials at Central Park.

Now, at age 40, and seven months after the latest in a string of surgeries, Khannouchi is logging upwards of 40 miles per week and contemplating another comeback. He would like to compete in a marathon next year, although it’s too early for him to target a specific race. He knows it could be his last shot.

“It might seem frustrating,” said Khannouchi, a Moroccan-born American citizen. “But for me, it’s a thousand times more than that. It’s very depressing.”

He thought he was on the road to recovery last summer. He gradually built his mileage up to 85 miles a week, placing 21st in the Healthy Kidney 10k at Central Park. His time of 30 minutes, 31 seconds was nearly three minutes slower than his personal best, but his priorities had changed. Content to be running and racing, he sensed progress. He even entertained the idea of trying to compete in the marathon at 2012 Olympics. Sure, the odds of qualifying were long. But what did he have to lose?

That dream evaporated last August at the Beach to Beacon 10k in Cape Elizabeth, Maine, where Khannouchi experienced what he refers to as “the pain.” It was something with which he was acutely familiar—burning sensations in his feet. And he immediately understood the consequences.

During a trip to Morocco in December, he underwent a procedure known as a metatarsal osteotomy. Khannouchi said a surgeon essentially realigned bones in both of his feet. He traveled to Spain to be fitted with special orthotics for his sneakers, and he plans to spend four to six weeks in Colorado this summer with Lorne Macdonald, a physical therapist. Khannouchi said he wants to race again. He cannot let go, he said. Not yet.

“I still have that mentality, that discipline,” said Khannouchi, who lives in Ossining, N.Y. “The people around me still see that hunger in me.”

At his peak, Khannouchi was known for his fearless approach. He craved competition against the top runners around. “That was the fun of it,” he said. Nothing scared him, and perhaps that mentality was the product of his experiences coming up—his dispute with the Moroccan track federation over funding, his bold move to the United States in 1992, his job as a dishwasher in Brooklyn, his long hours of road work and the success that eventually followed.

His training was the stuff of legend. In 1997, he set his sights on defeating Joseph Kimani, a Kenyan who had made a habit of outracing him. So one week before a showdown at the Bix 7, a high-profile seven-mile road race in Iowa, Khannouchi retired to the mountains outside Albuquerque, N.M., for some intense workouts. It was unorthodox. Most runners taper their mileage before big races. Khannouchi? Not so much.

Yousri Elmejdoubi, his training partner that week, recalled one day of particular masochism. In the morning, they ran 10 miles at altitude. It was a familiar route, and Elmejdoubi—a competitive runner in his own right—said Khannouchi pushed him so hard that he completed it seven minutes faster than he ever had. Khannouchi still finished four minutes ahead of him. That afternoon, Khannouchi hit the track for a grueling workout that included a series of 400-meter and 1,000-meter intervals. Five days later, he won the Bix 7 by beating Kimani by 15 seconds and averaging 4:42 per mile. “He was intense, intense, intense,” Elmejdoubi said.

Khannouchi became synonymous with the Chicago Marathon, where he was hugely popular. Race director Carey Pinkowski said Khannouchi “revolutionized” the way other athletes attacked the distance. Nobody could close a race quite like Khannouchi, who sought to run the second half faster than the first. “I think he just scratched the surface of what he could have done, had he stayed healthy,” Pinkowski said.

If that sounds extreme, consider Khannouchi’s performance at the London Marathon in 2002. Despite holding the world record, Khannouchi arrived as an underdog against the likes of Paul Tergat and Haile Gebrselassie, icons of the sport. Khannouchi beat them both, finishing in 2:05:42 and breaking his own world record in the process. Ken Young, the founder and director of the National Running Data Center, said the race still holds the distinction of being the most competitive men’s marathon field ever assembled.

“I came into that race angry,” Khannouchi said. “It was a real joy to win.”

In hindsight, there are obvious questions. By grinding through such demanding training, did Khannouchi put himself at greater risk of injury? Impossible to know for sure, though he acknowledges the paradox: In all likelihood, his competitive desire—that hunger to win, cloaked in a 5-foot-5, 120-pound frame—both carried him to the apex of his profession and curtailed his career.

“But there’s nothing you can control about that,” Khannouchi said. “You can’t say, ‘You know what? Instead of running hard today, let’s save my body for another year.’ It doesn’t work that way. I don’t regret what I’ve done, because I had a lot of good days and good years.”

There was another issue. Khannouchi said his left leg is one centimeter longer than his right leg. Dr. John Connors, a sports podiatrist who has operated on Khannouchi three times, said the difference is even less than that—about six to eight millimeters. For a man who has covered tens of thousands of miles in training alone, it could be considered a cruel joke. Millimeters? But almost all of Khannouchi’s injuries have stemmed from that small biomechanical flaw, Connors said. There is a cumulative effect.

“Over time, that insignificant value becomes significant,” said Connors, who rattled through an abridged list of Khannouchi’s ailments—patellofemoral syndrome, ankle impingement, bone spurs and something called hallux rigidus, which is degenerative arthritis in the big toe.

Khannouchi said he exercises more caution these days. “I won’t jeopardize anything,” he said. “I won’t do anything that will stop me from running forever. I won’t take that risk.”

Life is good, he said. He re-married last month in Morocco. He continues to make promotional appearances for New Balance, his longtime sponsor. He also said he intends to finish his degree in business whenever he does decide to retire from competitive running. But for now, he feels confident about his latest comeback. He said he wants to give his dream one more year, even as he copes with the fragility of the pursuit—with the brittle hope that the pain will stay away. “I’m not afraid,” he said.