New York,- As in the seven previous sessions, the eighth session of informal talks on the Sahara between Morocco and the Polisario ended on Thursday in Long Island, New York, without any progress. Delegations from Algeria and Mauritania were also present at the opening and closing sessions, and during the discussion of the Confidence Building measures. 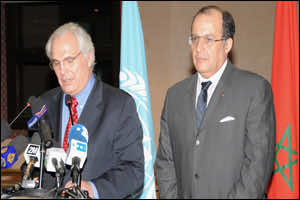 New York,- As in the seven previous sessions, the eighth session of informal talks on the Sahara between Morocco and the Polisario ended on Thursday in Long Island, New York, without any progress. Delegations from Algeria and Mauritania were also present at the opening and closing sessions, and during the discussion of the Confidence Building measures.

The discussions took place in an atmosphere of “serious engagement, frankness, and mutual respect”, read the press communiqué issued by the Personal Envoy of the Secretary-General of the United Nations for the Sahara, Mr. Christopher Ross.

The two-day long discussions focused on the parties respective proposals on a settlement, including the issue of mechanisms for self-determination. They also discussed the Secretary-General’s most recent Report on the Situation in Western Sahara (S/2011/249). Confidence-building measures, demining and natural resources have also been discussed.

According to the UNSG’s Personal Envoy, “the parties continued to deepen their discussions on the two proposals, including the issue of the electoral corps, mechanisms for self-determination and the forms of guarantees”.

However as in the seven previous informal talks, “each party continued to reject the proposal of the other as a sole basis for future negotiation”, the communiqué noted.

“The parties continued their discussions on the new ideas put forward by the Secretary-General in paragraph 120 of his report (S/2011/249) and endorsed by the Security Council”, the communiqué added.

In his annual report to the Security Council (S/2011/249) Ban Ki moon recommended three initiatives to Morocco and the Polisario in order to end the stalemate in negotiations and find a lasting and mutually acceptable political solution to the Sahara conflict:

First: that the parties find a means to include respected representatives of a wide cross-section of the population of Western Sahara inside and outside the Territory, formally or informally, in the consideration and discussion of issues related to final status and the exercise of self-determination;

Second: that the parties further deepen their examination of each other’s proposals and, in particular, seek common ground on the one major point of convergence in their two proposals: the need to obtain the approval of the population for any agreement. It is instructive in this regard that the proposals of both parties foresee, albeit in different form, a referendum that will constitute a free exercise of the right to self-determination;

Third: that the parties devote additional energy to identifying and discussing a wide range of governance issues with a view to meeting the needs of the people of Western Sahara and with the understanding that many aspects of these issues can be discussed without reference to the nature of the final status of the Territory, for example, how to structure its executive, legislative and judicial branches, how to organize and conduct elections and how to design primary and secondary education.

Over the last decade, many observers have stated that an independent Saharawi State cannot be envisaged as a “realistic option”. This was the message conveyed by the spokesman of the American Department of State on April 30th 2008 before the UN Security Council, on the occasion of the vote of resolution S/RES/1813. Similarly, in an interview given to the Spanish newspaper El Pais, the former Personal Envoy of the UN Secretary General for the Sahara, Peter Walsum, stated that the establishment of a Sahrawi State is not an “accessible objective”. Back in 2000, in his report to the Security Council on the Situation in the Sahara (S/2000/461) Kofi Annan, then Secretary General of the United Nations, stated that it is essential that the parties be “prepared to consider other ways of achieving an early, durable and agreed resolution” over their dispute over the Sahara.

The next informal meeting will take place after the fall session of the General Assembly in September.