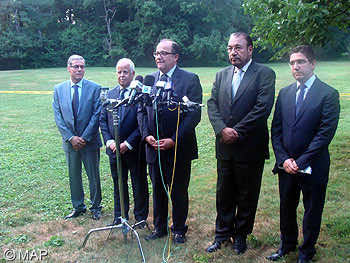 Foreign Minister Taib Fassi Fihri said, Thursday night in Manhasset, the underway normalization process of relations between Morocco and Algeria is likely to “contribute to the resolution” of the Sahara issue.

This process which includes “many areas as well as exchanges of visits at ministerial level is likely to meet the challenges facing the Arab Maghreb region at economic and security levels, and thus to contribute to solving this regional dispute,” Fassi Fihri said at a press briefing at the end of the 8th round of the U.N. backed informal talks on the Sahara, held on 19-21 July.

In this regard, he called on Algeria to comply with international law, notably the humanitarian law in the Tindouf camps.

“The 8th informal talks allowed the Moroccan to reiterate its call upon the international community and Algeria, as host country for refugees on its territory, to apply first and foremost international humanitarian law, notably the organization and census” of the population living in the Tindouf camps (Algeria’s south-west) for decades, he said.

He noted, in this regard, “an ambiguity as to the laws applied in the camps on the Algerian territory, to the responsibility and commitments with which Algeria is necessary to comply.”

Other parties prefer the impasse, regretted the minister, denouncing the fact that the polisario has reneged on its commitments to include the human rights question, proposal that Morocco accepted it, but the polisario went back on raising this issue.

He also pointed to “the strong reluctance of the polisario regarding the innovative approach initiated by the U.N. Personal Envoy, Christopher Ross, as well as vis- à-vis the new themes included in this approach,” namely the territorial governance, particularly related to education, health and the environment.

Morocco noted with satisfaction that the United Nations, as stipulated in the Security Council’s latest resolution, insist that both parties are part of this parallel approach.

“More importantly,” he said, “there is a need to involve (at future meetings) legitimate and credible representatives of the southern provinces and outside, so that they can contribute and reflect on a final settlement.” Among the topics included in this new approach, the minister mentioned the issue of natural resources.
Morocco, meanwhile, expressed its “full willingness to continue its consideration of all these points,” said Fassi Fihri.

This round, he said, was also a new opportunity to present the Moroccan autonomy initiative as a comprehensive and legitimate proposal, as it was pointed out by the Security Council, and recall its full respect of international legality.

With the home front unity on the issue of the Sahara, and the legitimacy and rightness of its cause, Morocco will continue its development project at the socio-economic, cultural and political levels, recalling in this regard the holding of the referendum on the new draft constitution, overwhelmingly approved by Moroccans, he said.