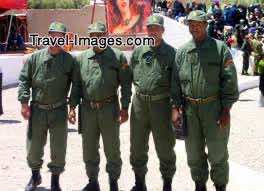 Morocco said on Friday one of its paramilitaries had died after a shoot-out with suspected Algerian rebels, the first such incident since the start of an insurgency in Algeria two decades ago.

Morocco’s Interior Ministry said the clash on Thursday was around a km (half a mile) from the Algerian border in a hamlet in the eastern province of Jerada.

The four men were “armed individuals” who entered from Algeria. “Posing as Algerian mujahideens, they went to the house of a Moroccan national … to obtain food supplies,” it said.

“Having noticed their intrusion, (Moroccan) border patrols intervened to intercept them … The armed intruders managed to flee towards the Algerian territory after the shoot-out.”

The victim was a member of the paramilitary Auxiliary Forces which fall under the Interior Ministry and are often deployed to tame domestic unrest, guard borders or support the army.

Border incidents are rare even though the two countries — often at odds, mainly over the disputed Western Sahara — share a long and porous frontier that has been closed since 1994