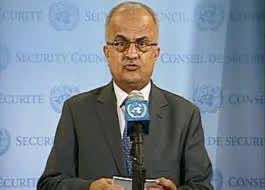 A U.N. envoy will seek to persuade warring parties in Libya to accept a plan that envisages a ceasefire and a power-sharing government – but with no role for Muammar Gaddafi, a European diplomat said.

The diplomat said the informal proposals would be canvassed by the special U.N. envoy to Libya, Abdul Elah al-Khatib, who has met both government and rebels several times.

Khatib, a Jordanian senator, told Reuters in Amman he hoped both sides would accept his ideas.

“The U.N. is exerting very serious efforts to create a political process that has two pillars; one is an agreement on a ceasefire and simultaneously an agreement on setting up a mechanism to manage the transitional period,” he said.

He did not go into the details of that mechanism.

In public, the Libyan leader remained firm, telling supporters he would never countenance talks with the rebels who rose up in February to try to end his 41-year one-man rule.

“There will be no talks between me and them until Judgment Day,” Gaddafi told a crowd of thousands in his home town of Sirte in a remotely delivered audio message on Thursday.

“They need to talk with the Libyan people … and they will respond to them.”

He has, however, said he welcomes talks with Western powers, with no preconditions But Washington and Paris say they have given his officials the same simple message: Gaddafi must go.

Gaddafi has stepped up his defiant rhetoric in frequent speeches as pressure mounts amid persistent reports of talks.

The rebels have this week declared advances on several front lines in the divided country, but seem unlikely to unseat him quickly despite months of backing from NATO air strikes, authorised under a U.N. resolution to protect civilians.

Analysts say the stalemate has led to intensified diplomatic overtures, with France saying for the first time this week that Gaddafi could stay in Libya as long as he gives up power.

The European diplomat, who declined to be named, said talks had yet to start on Khatib’s plan, which foresees an immediate transitional authority made up equally of government and rebels.

The authority would appoint a president, run the security forces and supervise a reconciliation process, leading to elections to an assembly which would write a constitution.

Gaddafi and his sons would be excluded from the authority since the rebels would never accept them, but his prime minister, for example, might have a role, the diplomat said.

The Libyan leader would only accept a transition if his own fate was guaranteed, so he would not immediately be handed to the International Criminal Court in The Hague, which wants him tried for crimes against humanity allegedly committed by his forces, he added.

The rebels, who have struggled to arm and organise, have suffered losses in the past week near the town of Misrata which they control, and are fighting for the eastern oil hub Brega.

On Thursday they said minefields slowed their advance on Brega — which they had earlier claimed to have all but captured — but that they had pushed closer to Zlitan, on the Mediterranean coast 160 km (100 miles) east of Tripoli.

Rebels, like the government, are saying in public that no one seriously expected talks to end the crisis.