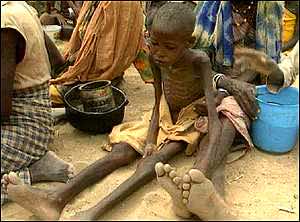 MOGADISHU (Reuters) – Islamist rebels in Somalia — who control the parts of the country where famine was declared this week — have said aid agencies they expelled from those areas last year cannot return, reversing a previous pledge.

The al Qaeda-linked al Shabaab militants imposed a ban on food aid in 2010, which the U.N. and Washington say has worsened the crisis, before appearing to reverse it last week.

The U.N. World Food Programme (WFP) was among several groups ordered out of rebel areas which are now preparing to return, describing the situation in Somaliaas “extremely dire”.

The United Nations told Reuters it had not heard about any new position from the rebels and planned to take last week’s pledge at face value and push ahead with food shipments by air and sea.

Al Shabaab had promised to allow relief agencies with “no hidden agendas” greater access to their territory.

“The so-called aid agencies that were already banned and named are not part of the agencies we free to work in al Shabaab areas,” al Shabab spokesman, Ali Mohamud Raghe, told a news conference late on Thursday in a rebel-held part of capital Mogadishu.

“They had problems with people and had a hidden agenda. We shall also expel any agency that causes problems for Muslim society,” he added, urging hungry Somalis to stay in their homes and wait for the rain to come rather than going to foreign-run refugee camps.

Some 10 million people are affected by famine and drought in a region, dubbed the “triangle of death” by local media, that straddles Kenya, Somalia and Ethiopia.

The U.N. told Reuters it had a “moral imperative” to get back into the areas from which it had been ordered out.

“The approach is to test the ground, to probe and see how far we get,” WFP spokesman, David Orr, told Reuters in Nairobi. “We are going to push the operation out unless we hear any different.”

The WFP delivers its food in Somalia through local aid groups and not directly, Orr said.

Al Shabaab accused the United Nations on Thursday of exaggerating the severity of the drought gripping the south of the country and of politicising the humanitarian crisis.

Some analysts in the region say the insurgents will have to allow aid in for fear of a public backlash if they do not, but that allowing Western organisations into their territory is difficult to sell to al Shabaab’s more hardline leaders.

WFP at one stage faced demands from the rebels to remove women from their jobs and pay thousands of dollars for security every six months.

Aid agencies ramped up efforts across the region on Friday and intensified international appeals for funding as the crisis began to make international headlines.

The ICRC, one of the very few aid agencies which has kept up its operations in central and southern Somalia, said it had been able to operate throughout the area.

“… we have come to agreements on conditions under which we operate in these areas and it been has (possible) for us to carry out all the operations that we have planned until now and also during the last few months,” ICRC spokeswoman Nicole Engelbrecht told reporters in Geneva.

UNICEF and UNHCR have maintained a limited presence working through local partners and are working to scale up their operations.

UNICEF, the U.N.’s children agency, were only able to provide care to 35,000 of 640,000 acutely malnourished children in southern Somalia, spokeswoman Shantha Bloemen said.

Nearly 135,000 Somalis have fled since January, mainly to Kenya and Ethiopia. An average of 1,700 and 1,300 Somalis are arriving in Ethiopia and Kenya respectively each day.

The U.N. defines famine as at least 20 percent of households facing extreme food shortages, a crude mortality rate of more than 2 people per 10,000 per day and malnutrition rates of above 30 percent.

Countries including the United States and Britain have stepped up pledges but charities have criticised the response of many governments to funding an estimated $800 million shortfall.

Somaliahas had no effective central government for two decades, worsening the impact of recurring droughts. The rebels control pockets of the capital Mogadishu and swathes of southern and central Somalia.