By Sami Aboudi and Marwa Awad 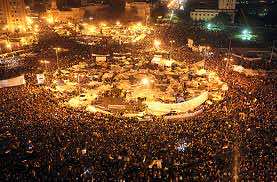 By Sami Aboudi and Marwa Awad

Cairo – Hundreds of Egyptians braved scorching heat on Friday to demonstrate against the ruling military council, refusing to dismantle a protest camp they had set up two weeks ago in central Cairo.

“Down, down with the rule of the military,” they chanted after performing Friday prayers in Tahrir Square, the epicentre of the uprising that toppled President Hosni Mubarak in February. “We, the people are the red line,” they added.

They kept up their protests despite a cabinet reshuffle this week and official promises of faster reforms.

Prime Minister Essam Sharaf, in a speech after his new cabinet was sworn in on Thursday, promised to set up an anti-corruption body and work to scrap a 30-year-old emergency law.

He also said the interior minister would appoint a human rights adviser, and that human rights and civil society groups would have access to prisons to monitor prisoners’ rights.

But activists said the moves were not sufficient.

“We are continuing the sit-in because the families of the martyrs have demands that have not been met yet,” said Shadi Ghazali Harb from the Youth Coalition.

“The July 8 protests were triggered by the pending demands of families who are angry with the slow pace of prosecution of those who killed protesters,” he added.

Harb said the Youth Coalition was forming a committee to meet the interior and justice ministries to press the demands of families of the 840 Egyptians killed in the anti-Mubarak revolt.

Their demands include putting officers charged with shooting demonstrators into “protective custody so they would not intimidate the families of martyrs” and appointing a new prosecution team to swiftly look into outstanding cases of killings of protesters.

Activists, mainly representing secular, liberal and leftist groups, have been camping in Tahrir Square since July 8, after a court decided to release on bail 10 policemen charged with killing demonstrators in the Suez Canal city of Suez in January.

About 300 people held a separate rally in another part of Cairo in support of the military council, calling for “stability” and an end to protests in Egypt.

Islamist groups, including the once-banned Muslim Brotherhood and Salafist groups who advocate adherence to early Islamic teachings, plan to hold a rally in Cairo on July 29 to press for a return to stability in Egypt.

In the Mediterranean city of Alexandria, hundreds of demonstrators chanted “Oh Tantawi, make a decision, either you are with us or you will also be tried.”

Hundreds also chanted: “With our soul and with our blood, we redeem the revolution” in a rally held after Friday prayers.

“Everyone who was martyred in Tahrir Square is my brother,” said Adel Mohamed, a 31-year-old car parts salesman who said he started out as an opponent of the January 25 uprising against Mubarak and then became a strong supporter.

Holding a placard reading “I hear the cry of a martyr asking where are my rights”, Mohamed said he plans to stay in Tahrir Square until all demands are met.

“We will be here even after Ramadan,” he said, referring to the Muslim fasting month which starts in August.

Among the marchers was Farouq Ali Mohammed Sherif, 73, a businessman who said he had been unjustly jailed under Mubarak.

“I came to Tahrir to demand justice, not for myself but for all the young people in Egypt,” he said. “And I won’t leave until justice is done.”