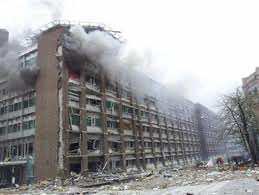 The cause of the blast was unknown but the tangled wreckage of a car was outside one building and the damage appeared consistent to witnesses with that from car bombs.

Police and fire officials declined comment on the cause. The blast blew out most windows on the 17-storey building housing Stoltenberg’s office, as well as nearby ministries including the oil ministry, which was on fire.

Norwegian news agency NTB said that Stoltenberg was safe. NATO member Norway has sometimes in the past been threatened by leaders of al Qaeda for its involvement in Afghanistan. However, political violence is virtually unknown in the country.