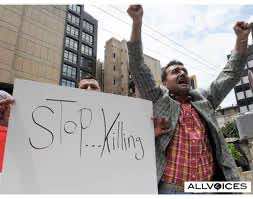 The United Nations special advisers on genocide prevention and the principle of responsibility to protect today voiced alarm at persistent reports of widespread and systematic human rights violations perpetrated by security forces in Syria, saying that crimes against humanity may have been committed.

Serious violations of international human rights law are reported to have systematically occurred in the context of the attacks on civilians, they said in a joint statement to the media.

“Based on available information, the Special Advisers consider that the scale and gravity of the violations indicate a serious possibility that crimes against humanity may have been committed and continue to be committed in Syria,” said Mr. Deng and Mr. Luck.

They called for an “independent, thorough, and objective investigation” of the events in Syria, where demonstrations by civilians calling for greater democracy have been brutally suppressed.

The UN advisers echoed calls by the Secretary-General to the Syrian Government to allow humanitarian access to areas affected by the unrest and to facilitate the visit of the UN Human Rights Council-mandated fact-finding mission to the country.

“Without these steps, it will be very difficult to defuse existing tensions and to prevent the escalation of violence,” they said. “All actors involved in the current crisis in Syria are urged to refrain from the use of force, from acts of violence, or from incitement to violence.”

Mr. Deng and Mr. Luck reminded the Syrian Government of its responsibility to protect its population, as all heads of State and government pledged to do in the outcome document of the 2005 UN summit.

“They [heads of State] agreed to prevent genocide, war crimes, ethnic cleansing, and crimes against humanity, as well as their incitement.

“To that end, the Government should work with civil society to encourage understanding and trust between communities, while taking care not to act in a way that could exacerbate possible differences,” the two advisers said.

As a first step, they urged the Syrian Government to ensure that security forces and civilian personnel under their command “comply fully and consistently” with international human rights obligations when carrying out their duties.