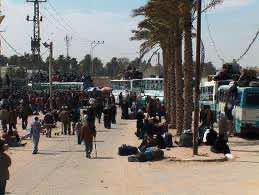 The ministry of foreign affairs issued a statement on Wednesday saying that Foreign Minister Mohamed Al-Orabi criticized Israel’s seizure of the ship, which was carrying aid to the Gaza Strip.

The Israeli Navy on Tuesday seized control of the ship that was attempting to break its blockade of the Palestinian territory to land in Gaza City’s port.

The statement quoted Al-Orabi as saying “Israel’s action once again highlights the tragedy of the Gaza Strip, which has been facing an unjust and harsh Israeli siege for five years”.

He pointed out that this action should be a message to the world that it is time to end the siege.

“Israel’s aggressive behavior exposes the falsehood of the Israeli claim that it ended its Gaza occupation”, said Orabi.

Orabi went on to say that Israel continues to bear the full responsibility for the continued suffering of the people of Gaza.

He added that Egypt would continue its efforts to alleviate the suffering of the Gaza Strip residents by sending aid and facilitating the movement of Palestinians to and from Gaza through the Rafah crossing border.

Foreign Minister, Mohamed Al-Orabi has been asked to steer the Ministry’s work pending the announcement of the new Cabinet.