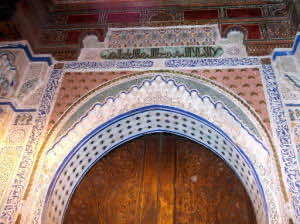 Fez, Morocco: The name might conjure images of a fez hat — a red hat in the shape of a short cylinder with a tassel, a popular fashion attribute of the Ottomans in the 19th century. Plenty of fez hats can be found in the city, either worn or being sold, but there is much more to the second-largest Moroccan city, which once served as the capital.

Fes el Bali is a large medina — a walled part of the city — built around 800. Behind the walls winds a continuous labyrinth of market stalls selling anything you could imagine, from traditional Moroccan slippers and colorful dresses, to sweet delicacies and fresh meat, spices, oils and perfumes. There are items — ranging from purses to jackets — made from leather, which is tanned in a traditional, centuries-old way in large pits of natural coloring pigments.

Most of the inventories in the stalls are handmade, and finding a proper memento might be quite a challenge, especially with limited luggage space.

Every sense is stimulated while getting lost among these endless stalls — incredibly strong smells, bright colors and loud noises. It is crucial to be aware of the surroundings, since at any moment there might be a scooter rushing along the narrow walkway, or a donkey carrying a gigantic load on its back confidently facing everything on its way, or a cart full of goodies pulling its owner down a sloped way.

The medina takes the visitor back into history, full of traditions and unique atmosphere. Among the markets, there are a number of beautiful mosques. Since non-Muslims are not allowed to go inside, only the façade can be appreciated. The meticulous decorations of doorways are especially eye-catching.

There is nothing more refreshing than a freshly squeezed orange juice on a hot day. Juice-squeezers are omnipresent in Fez, along with other drink stands selling various fruit smoothies. It is also a must to try some prickly pears or cactus fruit, which is one of my favorites.

Restaurants and small vendors sell only traditional Moroccan cuisine, which is rich in spices, consists of various kinds of breads, salad, lots of olives (you would never believe how many kinds of olives are there!), couscous, and meat — chicken, beef and lamb. It is not uncommon to see a fully skinned sheep hanging in a butcher’s stand or a cow’s head resting on a table.

Incredibly sweet confectioneries invite hoards of bees and excited kids. Milk products are ubiquitous as well, yogurts, cheese . . . and all homemade, of course.

The Jewish Quarter, mellah, officially established in the 15th century, offers another glimpse into the past. Experiencing continuous ups and down, the Jewish community prospered at times, enjoying religious freedom and having its own schools. At other times, it faced harassment, oppression and even slaughter.

Today, the traces of Jews are contained within the cemetery and a number of buildings, some of which are in the process of restoration. No functioning synagogues remain; one former place of worship attached to the cemetery houses an exhibit of Jewish artifacts. More reminders are spread across the medina, with one of the districts named “funduq I-yihud,” meaning “the warehouse of the Jews.”

With its crazy traffic; rich history; cute, red “petit taxis;” and Moroccan culture in the air, Fez is becoming a popular tourist destination.

Blonde hair is still easily spotted from far away, and English is not widely spoken, but knowledge of French is a major plus. The friendliness of the people and local hospitality are unbelievable, creating a warm and welcoming environment. Fez is a definite must visit while in Morocco; and if in Spain, Morocco is only a discount airline flight or ferry ride away.