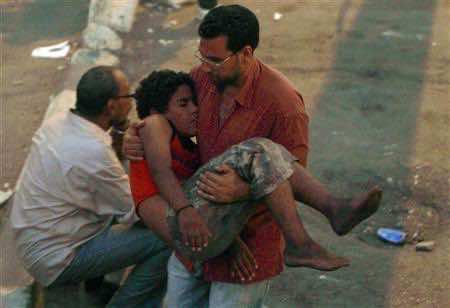 Scores of people were injured in Cairo on Saturday when thousands of demonstrators fought opponents with stones on their march to the Defence Ministry to urge their military rulers to speed up reforms, witnesses said.

They said most of the injuries occurred when civilians believed to be thugs hurled barrages of stones and firebombs at protesters, who fought back with stones torn up from pavements.

Military police, armed with Tasers and batons, fired in the air to stop the demonstrators from approaching the Defence Ministry. A Reuters witness said tear gas fumes were wafting outside the area as military helicopters circled overhead.

The Health Ministry told state television at least 143 people were hurt in the violence.

The clashes broke out after the head of the ruling military council, Field Marshal Mohamed Hussein Tantawi, promised in a televised speech to push ahead with elections to transform the Arab world’s most populous nation into a democracy.

Young demonstrators are angered by clashes between military police and protesters in a number of cities on Friday. The army denied using force against them.

Thousands of protesters marched from Tahrir Square, the epicentre of the January 25 protests that ousted Hosni Mubarak, towards the Defence Ministry chanting “peaceful, peaceful”.

“The people want to bring down the field marshal,” they chanted as they headed for the ministry, snarling traffic.

Tantawi, whose military council took over after Mubarak’s overthrow, was seen leaving the area before protesters arrived.

It was the 15th day of demonstrations, in Tahrir Square and other squares across the country, to back demands for more freedom for the civilian government, led by Essam Sharaf, an end to military trials and a timetable the completion of reforms.

He called on all political groups and movements in a statement on his Facebook page to work for “calm and stability, upholding the principles of dialogue and the exchange of opinion, and allowing the government to fulfill those goals.”

“The government is fully keen on implementing the demands of the people for freedom, democracy and social justice and it will work on translating those goals,” Sharaf said.

He was echoing promises of reform and a transition to democracy that were delivered earlier by Tantawi, in a speech to mark the anniversary of the 1952 revolution which overthrew King Farouk in a bloodless coup.

“We are committed to pressing ahead in turning Egypt to a modern civilian state,” Tantawi said.

“We are moving forward on the path to entrenching democracy that upholds freedoms and the rights of citizens through free and fair elections,” he added in a pre-recorded speech, his first address to the public since Mubarak was ousted.

Tantawi, Mubarak’s defence minister for two decades, did not give details, but spoke broadly of a “united front” to confront challenges facing Egypt both domestically and abroad.

“The decisive period in our people’s history requires concerted efforts from all Egyptians to confront the urgent challenges facing us that cannot be dealt with by hesitation or semi-solutions,” Tantawi said, citing efforts to limit the economic damage caused by the uprising.

Many ordinary Egyptians fear continued protests are derailing efforts to kick-start an economy that was hard hit when investors and tourists fled.

The clashes on Saturday broke out after civilians threw rocks from rooftops in adjacent buildings. Many in the crowd were thought by protesters to be thugs but some residents of the Abbassiya district were fearful protests in their neighbourhood were obstructing business and normalcy.

State media said the civilians fighting with the demonstrators were from “people’s committees” protecting the neighbourhood and the army had maintained all self-restraint, blaming the violence on protesters.

Some Abbasiya residents appeared to believe protesters were seeking to create rifts between the army and the people. One resident shouted at a woman with a bloodied skirt at the scene:

“Get out of here. You want to bring the entire country to a stand-still. Who is backing you? Do you want to doom us all?”

Such sentiment follows a series of statements from the ruling military council in which it warns of groups manipulating the revolution and seeking to drive a wedge between the armed forces and the people.

In the latest accusation, the military council denied the authorities used force against demonstrators on Friday and accused the April 6 Movement, one of the main groups behind the uprising that toppled Mubarak, of creating divisions.

“We will be the last to leave Tahrir Square, either alive with our heads held high after triumphantly achieving the demands of the Egyptian people or as martyrs for the sake of God and the nation,” the group added.