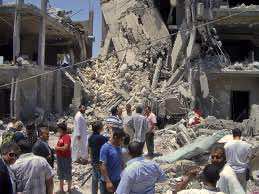 Libya’s leader is clinging to power despite a four-month-old NATO air campaign and a lengthening conflict with rebels seeking an end to his 41-year rule and who have seized large swathes of the North African country.

The explosions hit Tripoli at about 1 a.m. on Sunday, a day after NATO launched strikes on what it said was a military command site in Tripoli.

“Gaddafi has for decades hidden from the Libyan people behind these walls. The vast Bab al-Aziziyah compound is not just his personal residence, but more importantly is also the main headquarters for his regime, with command and control facilities and an army barracks,” Pope said on Sunday.

“Successive NATO strikes in past weeks have inflicted extensive damage on the military facilities within.”

As the war drags on longer than many had initially envisaged, the West is increasingly hoping for a negotiated end.

Libya’s government also appears willing to talk. Government spokesman Moussa Ibrahim said on Friday that Libyan representatives were ready to hold more talks with the United States and the rebels, but that Gaddafi would not quit.

Ibrahim said senior Libyan officials had a “productive dialogue” with U.S. counterparts last week in a rare meeting that followed the Obama administration’s recognition of the rebel government.

“We believe other meetings in the future … will help solve Libyan problems,” Ibrahim told reporters in Tripoli. “We are willing to talk to the Americans more.”

On the cusp of the Islamic holy month of Ramadan, poorly armed rebels seem unlikely to quickly unseat Gaddafi.

The rebels declared advances this week but they also suffered losses near Misrata and in fighting for Brega.

On Thursday rebels said minefields slowed their advance on Brega — which they had earlier claimed to have all but captured — but that they had pushed closer to Zlitan, on the Mediterranean coast 160 km (100 miles) east of Tripoli.

It was relatively quiet on the western front near Zlitan on Sunday, with some sporadic fire from Gaddafi’s forces. Most rebels were taking shelter from the hot sun. The forward field hospital had one wounded man on Sunday and 22 on Saturday.

“We are holding this position and waiting to move forward. God willing, it will be soon,” said Salim, a 21-year-old student and rebel volunteer.

Britain’s Pope said RAF jets on patrol near Zlitan successfully struck four buildings on Saturday, which NATO surveillance had identified as command and control centres and staging posts, as well as hitting an ammunition stockpile.

Apache helicopters also struck a number of military positions between Zlitan and Khums, he said.

Zlitan is the largest city between rebel-held Misrata and the capital Tripoli and remains in Gaddafi’s control. Were the rebels to take Zlitan, attention would turn to Khums, the next large town on the coastal road to the capital.

As Western nations intensify diplomatic efforts to foster an exit from the conflict, a European diplomat said that a U.N. envoy would seek to persuade warring parties in Libya to accept a plan that envisages a ceasefire and a power-sharing government, but with no role for Gaddafi.

The diplomat said the informal proposals would be canvassed by the special U.N. envoy to Libya, Abdul Elah al-Khatib, who has met both government and rebels several times.

Khatib, a Jordanian senator, told Reuters in Amman he hoped both sides would accept his ideas.

“The U.N. is exerting very serious efforts to create a political process that has two pillars; one is an agreement on a ceasefire and simultaneously an agreement on setting up a mechanism to manage the transitional period,” he said. He did not go into the details of that mechanism.

Hopes for a negotiated settlement are growing as Europe and the United States grapple with fiscal crises at home. This week, France said for the first time that Gaddafi could stay in Libya as long as he gives up power.

Complicating Gaddafi’s situation is the fact that the world court in The Hague seeks his arrest over crimes against humanity allegedly committed by his forces. This makes it difficult for him to find refuge outside the country.