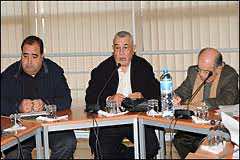 The ministry on Wednesday (July 20th) launched a series of meetings with politicians and other members of civil society to get feedback on the prospective laws. The draft legislation was originally submitted to political parties on July 14th. The majority of the kingdom’s political leaders praised the move to adopt a legal framework for monitoring elections.

“The first bill is to be applauded because it represents the legitimisation by Morocco of the presence of both national and international observers at elections. This is likely to guarantee greater transparency in elections,” said Abdelhamid Jmahri, a member of the Socialist Union of Popular Forces (USFP) policy committee.

The preliminary law on political parties, however, stirred up a hornet’s nest of heated debate. The most controversial aspect concerns party financing. The proposed text suggests three categories of funding for the parties. One type of funding would be for “legally constituted” political parties as a whole, while a second category would apply to parties with between three and five percent of the votes. Those receiving more than 5% of votes would be given additional funding.

“The fact that all political parties will receive funding is a good thing,” according to Abdelouahed Souhail, a member of the Party for Progress and Socialism (PPS) policy committee.

But some politicians said this would allow the creation of parties which were simply looking for money. “This will only encourage the fragmentation of the Moroccan political landscape,” Jmahri said.

“We want there to be criteria for the granting of subsidies to political parties, particularly the number of votes received in elections,” he stressed.

The Front of Democratic Forces (FFD) general-secretary proposed a different criterion, suggesting that funds be awarded “on the basis of the plans set out by the various organisations”.

Another point of disagreement surrounds the issue of party alliances. The proposed bill only discusses mergers between parties and not alliances. Political leaders would like the draft law to provide for blocs too, according to Mohand Laenser, Secretary-General of the Popular Movement, an alliance between three parties.

The bills are expected to be considered before Parliament sometime in the middle of next month.