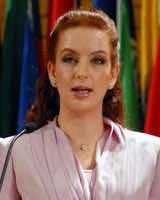 The report was carried out by various Moroccan news Websites citing the Israeli daily newspapers Maariv, which said the Moroccan princess had gifted Israeli politician and head of the Kadima party a gold and diamond necklace of great value during a secret trip Ms. Livni allegedly made to Rabat in 2009.

The reports added that Ms. Livni had kept the gift in a museum reserved by the Kadima party for gifts given by heads of states and celebrities to Israeli politicians.

Ms. Livni’s 2009 participation in the Amadeus Institute’s conference stirred was surrounded by a lot of controversy. The Islamist-rooted Justice and Development Party (PJD) as well as other civil society groups denounced the visit.

Saad Al Din Al Othmani, the PJD secretary general said, “We reject the visit of Livni or any other official representative of the Zionist entity to our country, especially after the UN General Assembly has accepted the Goldstone report, which condemns it and accuses its leaders – wanted in European courts – of committing war crimes in Gaza.”

Media sources in Morocco said it was possible that Ms. Livni received the necklace from some members of the Jewish community in Morocco. In 2009, Serge Berdigo, president of the Moroccan Jewish community offered Ms. Livni a number of gifts, including paintings, rugs and books.

Some observers in Morocco described claims Princess Lalla Salma offered a gift to Ms. Livni as an attempt to show that Morocco has close ties with Israel and to encourage other Arab countries to follow suit. Others suggested the reports were aimed at driving a wedge between Morocco’s ruling family and the general public, which opposes the Israeli occupation of Arab lands.

In March 2011 the Israeli Knesset House Committee discussed a new code of ethics for Knesset members that included a proposed ban on accepting gifts. Opposition Kadima party wants to allow Knesset members to be able to receive gifts.

The proposed ethical code requires publishing a list of all such gifts on the Internet, but Kadima wants to stop publication of any list of gifts that MKs are allowed to receive, according to Haaretz.