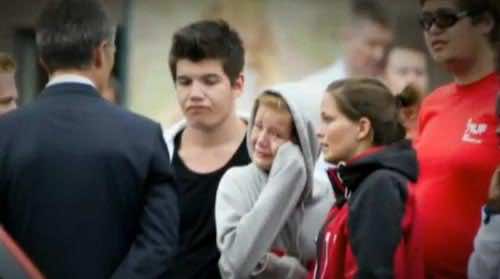 BARGA, Italy — The news from Oslo and Utoya Island shocked Italians. The horrifying carnage was all that anyone talked about this weekend at Caffe Aristo, Barga’s de facto social center, where calcio — soccer – and the latest sexual capers of Prime Minister Silvio Berlusconi usually monopolize conversation.

“A Massacre Without Pity,” the Sunday headline screamed in La Repubblica, the leading Italian daily. “Madness. How could it happen in a place like Norway?” asked Marino, the proprietor of Da Aristo.

The customers, my friends and neighbors, shook their heads. But I wondered, without saying so aloud, if the events that shattered Norway were really inexplicable. I wondered how remote they were from this small, outwardly peaceful town on the western edge of Tuscany.

In his madness, the self-described Christian fundamentalist, conservative Anders Behring Breivik, turned his weapons on fellow Norwegians, most of whom were as fair-haired and light-skinned as he is, killing nearly 100. But in a 1,500-page manifesto posted on the Web, he made it evident that the intended targets were Islam and multiculturalism.

Muslim immigrants and their advocates, he charged, were intent on destroying the Norwegian identity. “The time for dialogue is over,” he wrote in the manifesto.

Europe has heard such charges before, and paid an incalculable price when they escalated from deranged fantasies into dominant political movements. It’s too soon to say that it’s happening again. But it’s never too soon to listen for alarm bells.

Even among the ostensibly sane, you hear words quite similar to Breivik’s in Europe today. Substitute “Jews” for “Muslims” in his rants, and terrible echoes sound. They also sound in the curva, the soccer-stadium bleacher sections favored by Italian Ultras, violently nationalist fans who scream racist epithets at the black and Arab players of rival teams, and attack their fans with clubs and knives.

They sound in the rhetoric of xenophobic political parties, from Italy to Scandinavia, whose votes in national elections over the past decade have expanded at a pace unprecedented since the 1930s

History seldom repeats itself in precisely the same way. The Muslims who provoked Breivik’s rage are far poorer than the Jews who were the scapegoats of Adolf Hitler’s paranoid megalomania.

In the first decade of the 20th century, when Hitler was an art student in Vienna formulating his racial theories, more than half of the Austrian capital’s banking executives, lawyers and doctors were Jewish. Similar achievements had been registered by large Jewish communities in Paris, Warsaw, Berlin and Budapest.

They regarded themselves as fully Austrian, French, Polish, German and Hungarian, enthusiastically assimilated. Yet their very success as modern Europeans made them the objects of intense jealousy. Outright violence lay just under the surface. Hitler understood this, and transformed raging, irrational envy into a full-fledged militant ideology and a world war that cost 60 million lives.

By contrast, only a madman could be jealous of Europe’s Muslims. They are the poorest of the poor in today’s Europe — scarcely literate peasants from the Moroccan highlands, the slums of Algiers, rural Anatolia and parched sub-Sahelian villages in Mali and Senegal. The bankers, lawyers and doctors among them can be counted in the low hundreds, at most, in an Islamic community that numbers 16 million residents in a total European Union population of half a billion.

Their principal occupations are cleaning streets, collecting garbage, caring for infants and the Alzheimer’s-stricken elderly, washing dishes in restaurants or trudging on foot, with huge packs of kitchen tools and small appliances slung over their backs, to isolated hamlets in the mountains above towns like Barga.

The peak of ambition for most European Muslims in 2011 is to acquire a minuscule grocery store in Paris or Berlin, where they work 18-hour shifts trying to keep afloat against the competitive tide of giant supermarket chains.

Assimilation, in the immigrant EU, is not a simple option. There’s no time or money to study and master the local language, much less the nuances of its politics, culture and social mores.

I speak, now and then, with Fatima, a Moroccan neighbor, who like many Arab women in Tuscany, had little formal education before emigrating across the Mediterranean. Her husband, a bricklayer, has picked up construction-site phrases in Italian. But elementary French is the best Fatima can muster outside of her family’s cramped two-bedroom apartment – home to her and her sister, their husbands and four children.

“On a toujours peur de tromper,” she tells me. “We’re always afraid we’ll make a mistake.”

Fear – endless confusion over life in modern — leads many immigrants to cling to the customs and dress of their distant homelands. Fatima wears a headscarf. Her sister has put it aside, and I notice that her daughter, now 13, also goes without one. Yet the sister, ostensibly the more modern of the two women, always turns away when I greet her in the street, and as far as I can tell she has no Italian women friends.

“La peur,” Fatima says again, when I bring this up. “Fear is why we stay in our little Morocco.”

The fear and self-isolation of Muslim immigrants provokes a parallel reaction among the native-born who surround them. Theirs is the fear of being swept away by an alien culture, a sinister Islamic “other” that is as confusing to them as the modern world is to Fatima.

“There are hundreds of them here!” I overheard one of my friends, a woman of natural tolerance and generosity, say recently of Barga’s Moroccans in headscarves.

I’ve done a census of my own at the Questura, the provincial police headquarters where immigration statistics are kept. There are fewer than 800 foreigners resident in the entire 66-square kilometer (26-square-mile) area around Barga. Out of a population of 10,300, roughly 200 are Muslim.

Fatima agrees with my estimate that only 20 or so wear the headscarf, and in the town center of Barga itself they number less than a dozen.

Fear is an immensely potent tool, another point that Adolf Hitler understood very well. And if it’s too soon to conclude that Europe is headed toward racial Armageddon, there is no mistaking that irrational fear is everywhere in the landscape — as are politicians who are quick to make use of it.

Longtime liberal bastions Sweden, Denmark, Finland and Holland have all seen extremist rightwing parties enter parliament on the basis of anti-immigrant electoral campaigns. In Norway, the xenophobic Progress Party took a stunning 23 percent of the vote in 2009’s legislative elections, making it the second largest political grouping in the country.

Anders Behring Breivik was among its early activists, leaving the party a few years ago when he decided that it had become too centrist.

Marine LePen, the leader of France’s anti-immigrant National Front, stands a good chance of finishing second in next year’s presidential election. Umberto Bossi, the firebrand demagogue of Italy’s Northern League, has emerged as chief powerbroker in the fractious coalition of Prime Minister Silvio Berlusconi. Under pressure from Bossi, Berlusconi has increasingly ordered strategic police round-ups in immigrant districts, turning up the thermostat on popular anxieties when the coalition faces critical legislative votes -– or when his personal problems land him in court.

Not the least of those problems, cynics note, is a criminal investigation of his relationship with Karima El Mahroug, better known as Ruby Rubacuore (“Ruby Heart-Stealer), an underage Moroccan nightclub dancer.