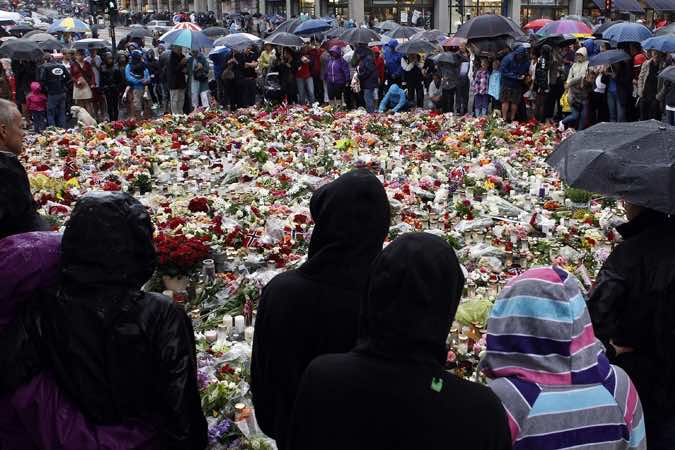 OSLO– In the aftermath of the twin attacks that left 93 people dead, Oslo’s Muslim community has told how they felt under suspicion after what was initially feared to have been an assault by Islamist militants.

In the streets of the capital on Sunday, many Muslims said they lived the first few hours after the car bomb explosion fearing the finger of blame was being pointed at them.

“On Friday, after the explosion, I didn’t go to work, I stayed at home,” said taxi driver Muahammad Ali Farah.

“I was scared, like all the taxi drivers — 99.7 percent are immigrants, you see,” said the 30-year-old, originally from the Somali capital Mogadishu.

“Everyone thought it was Islamists. My boss is Pakistani, he understood, he knows the problem. I didn’t go back to work until Saturday.”

Namir Atif, 30, said: “I feel Norwegian, I was born here but I am of Moroccan origin.

“It’s true that everyone immediately thought it was an Islamist attack, they pointed the finger at us.”

When Justice Minister Knut Storberget informed journalists that the suspect was Norwegian, he “almost looked sorry it wasn’t a foreigner”, Atif said.

In a report made public at the beginning of the year, Norwegian state security expressed fears of an Islamist attack on their soil but did not consider the extreme right as a “serious threat”.

In the hours that followed the attacks, authorities said they were considering all possible scenarios, including an attack by Islamist militants. Yet it was native Norwegian Anders Behring Breivik, 32, a “Christian fundamentalist” with far-right leanings who was ultimately arrested.

At least seven people were killed in a car bomb blast outside government buildings in central Oslo and 86 died after the mass shooting on the island of Utoeya, 40 kilometres away (25 miles), where a Labour party youth meeting was being held.

Naima, a woman from Morocco who did not want to give her full name, said she arrived in Oslo three months ago.

She said she feels happy here but admitted to being worried immediately after the bomb explosion, which occurred not far from where she lives.

Naima said she realised that the nearby Muslim community would be under suspicion.

“They arrested a Moroccan a few hours after for no reason,” said a young Tunisian man who did not give his name as he said he did not have residency papers.

Sitting on a cafe terrace with several others, he is annoyed that the Muslim community is always held responsible “the moment a bomb explodes”.

A Palestinian man added: “Norway is my country, Muslims too are saddened by this tragedy.

“I feel bad that people think a Muslim is capable of doing this.”