By Ahmed Charai and Joseph Braude 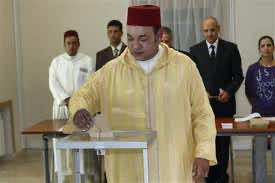 By Ahmed Charai and Joseph Braude

It isn’t news anymore when an Arab ruler facing mass protests pledges sweeping reforms. But Morocco’s 1 July constitutional referendum may be the most significant development in the Arab world all summer. For the first time since the Arab Spring began, a population broadly embraced its leader’s reforms and scaled back anti-government demonstrations. In the weeks before the referendum, over 100,000 people had taken to the streets; after the vote only about 10,000 did.

A sizable majority of Moroccans approved the new constitution, which calls for King Mohammed VI to cede half his power to a prime minister appointed from the parliament’s majority party and ensures the rights of women and non-Arabs, including the country’s large Berber population.

Morocco appears to have found a new model for political transition. If the constitutional experiment succeeds, the country will have the opportunity — and responsibility — to take on the regional leadership role that has traditionally been played by Egypt.

The major parliamentary opposition parties, including the main Islamist party, endorsed the constitution. Those rejecting it, including a radical Islamist group which aims to overthrow the king and install a caliph, had the chance to make their cases on public radio and television. Some officials believe this new openness is serving as a force for moderation. “The more the extremists go on TV, the more ridiculous they look,” said Nawfel Raghay, who manages the country’s broadcasting authority. “We should have done this 20 years ago.”

The constitution’s power split provides a check against Islamists, if they were to win elections. In the event of an Islamist landslide, a new sharia-minded prime minister would have the authority to appoint all senior civil servants and oversee domestic security. However, control over the army and foreign intelligence services would rest with the king. The monarch would also retain his traditional role as the country’s highest religious authority — meaning that he could block attempts to use mosques, the news media and religious education to impose chauvinist religious mores.

This novel arrangement also addresses the historic dilemma between values and interests the West has faced in its relationship with Morocco. The country has long been regarded as a constructive player in regional affairs, but its pro-Western authoritarian elite has a troubling human rights record and has constrained political and economic opportunity for the country’s impoverished majority. The constitution could allow the emergence of new elites and open up the political arena.

It is important for America and its allies that Morocco achieve this balance at a time when Egypt is not in a position to serve as a regional powerbroker. Under its former president, Hosni Mubarak, Egypt served as a bridge between Arab monarchies like Saudi Arabia, and Arab dictatorships like Syria and Libya. But today, there is a new Arab political divide — between autocracies and countries undergoing democratic transitions. Morocco, a transitioning government itself and a prospective member of the Saudi-led Gulf Cooperation Council, is uniquely positioned to bridge this divide.

Whereas Mubarak mediated between Israelis and Palestinians, the new Egyptian government has yet to form a coherent policy on that conflict, let alone earn the trust of both sides. Morocco, by contrast, has a history of doing so. Years before Egypt normalised diplomatic relations with Israel in 1980, the Moroccan king Hassan II was a liaison between Israel and its neighbours. The country’s distance from Israel was not a serious disadvantage then, and it is even less so today in the era of instant communication and intercontinental strategic partnerships.

Morocco also has a deep historical bond with the Jewish people: the king protected 200,000 Moroccan Jews from the Nazis during World War II, and nearly one million Israelis have Moroccan roots — including some senior political and military officials. Morocco can extract concessions from both parties to the conflict that Egypt never could.

The Moroccan constitutional model sets an obvious example for Jordan, whose king also claims some religious authority and remains relatively popular. For the more embattled Sunni kingdom of Bahrain, a similar pact of electoral power-sharing with the Shiite majority may be the only way, in the long run, for Bahrain’s dynasty to survive.

Before the referendum, scores of protesters were wounded by the police, and one was killed. While this violence is deplorable, it is a far cry from that of Egypt, where hundreds died, let alone Libya and Syria, where state security forces have killed thousands.

There is great optimism in Morocco today. Millions have signalled their desire for freedom and opportunity within a constitutional framework. If parliament is vigilant in ensuring that the reforms are swiftly applied, Morocco can set an example for peaceful political transitions across the Arab world.

Ahmed Charai is the publisher of the weekly Moroccan newspaper L’Observateur. Joseph Braude is the author of The Honored Dead: A Story of Friendship, Murder, and the Search for Truth in the Arab World.