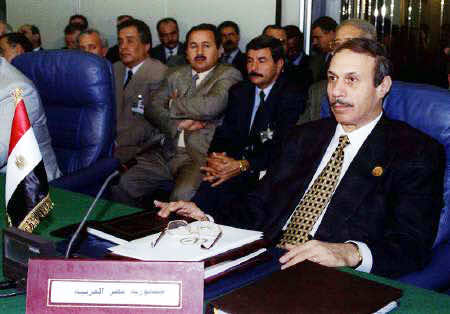 A court postponed on Monday the trial of Egypt’s former interior minister over the killing of protesters until next week so that he will be tried alongside ousted President Hosni Mubarak.

The ruling followed a weekend of clashes involving protesters demanding swifter reforms and faster prosecution of Mubarak and his officials after February’s revolution. Demonstrators clashed with stone-throwing men and scuffled with soldiers who blocked a march.

Many Egyptians believe the army is reluctant to speed up the trial of Mubarak, its former commander-in-chief, and say it wants to prevent his public humiliation. They also accuse the army of delaying other reforms.

Judge Adel Abdel-Salam ordered the trial of Habib al-Adli be postponed until August 3 so it was “joined with the case related to the trial of the former President Hosni Mubarak”, adding that the evidence and charges were the same. Six others involved in the Adli case will stand trial on the same day.

Some protesters at the court on the outskirts of Cairo hurled stones at the police van taking Adli from the court.

“Why did they postpone the trial today? We are tired of this never-ending postponement. The son of my brother died in the revolution; who will give us our rights … if the court keeps postponing trials of those who killed him?” asked Mohamed Abdou, who was outside the court.

Mubarak and his two sons, Alaa and Gamal, have been charged in connection with the killing of demonstrators. More than 840 died in the 18-day uprising that ousted the president on February 11.

Mubarak, 83, has been in hospital since April, when he was first questioned. Judicial and security sources told Reuters this month his trial might take place in the Red Sea resort of Sharm el-Sheikh where he is in hospital, and not in Cairo.

His two sons are being held in aCairoprison.

‘WHY TAKE ALL THIS TIME?’

Adli, who stood in a cage in court during Monday’s hearing, is reviled by protesters after the police force he commanded used live ammunition, teargas and water cannon to try to break up protests against Mubarak.

“According to me, I am against the postponement. Why take all this time?” said Foad Kamal, who works in a supermarket chain. He had come to the court expecting a verdict.

About 300 people were injured in Cairo on Saturday when thousands of demonstrators fought opponents with stones on a march to the Defence Ministry to urge the ruling military council to speed up reforms.

Activists blamed the violence on thugs who they said were encouraged by the authorities and remnants of Mubarak’s ruling party. Protesters also scuffled with military police who were barring the way to the ministry.

The army has dismissed the charges and said it did not use force against demonstrators.

“What happened on Saturday was a planned attack against peaceful protesters who aim to keep up pressure on the military council to bring about faster reforms,” said Mohamed Fahmy, a member of the Youth Coalition of the Revolution.

“We will continue to muster people on the street next Friday. We will respond in peaceful protest to Saturday’s events,” Fahmy said.

Protesters have increasingly criticised the army and arranged coordinated demonstrations in Cairo and the port cities of Alexandria and Suez.

Separately, the military prosecution began questioning former prime minister Ahmed Nazif over a charge of facilitating the sale of army-owned land to a businessman, the state’s news agency said.

Nazif was sentenced to a one-year suspended jail term this month for squandering public funds in a case involving alleged irregularities in the procurement of vehicle licence plates. g by Edmund Blair)