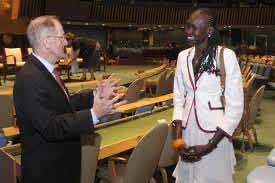 Hundreds of young people converged on the United Nations in New York today as the General Assembly kicked off a high-level meeting devoted to tackling the challenges facing youth and exploring their potential to bring about change in their societies and in the world at large.

“We are seeking to promote a culture of dialogue and mutual understanding between young people and with young people as key stakeholders in today’s world,” Assembly President Joseph Deiss said as he opened the meeting.

“The events of recent months, in the Arab world in particular, have shown us the extent to which young people are key players in our societies and to what extent they can mobilize for change,” he added, as he called for drawing to a greater extent on the energy and enthusiasm of young people and to create the conditions to enable them to flourish.

“The meeting,” he later told reporters, “aims at underscoring the importance of supporting young people’s vast and untapped potential.”

The two-day meeting, which is focusing on the theme of “Youth: Dialogue and Mutual Understanding,” is among events to mark the International Year of Youth, which comes to a close on International Youth Day on 12 August.

The event began on a sombre note with participants observing a minute of silence in memory of the victims of the terror attacks that took place in Norway on Friday in which more than 75 people were killed, including young people who were gunned down at a youth camp connected to the ruling Labour Party.

“I am particularly saddened that this murderer singled out young people keen to engage meaningfully in the future of their country,” Secretary-General Ban Ki-moon said in his remarks to the gathering. “This atrocity stands in stark opposition to the theme of this meeting, which is dialogue and mutual understanding.”

He went on to note that the past few months have been momentous for youth, who have been at the centre of a movement for change that is sweeping North Africa and the Middle East.

“The Facebook generation is showing a growing resolve to change our world – and a capacity to make things happen,” he said. “They are bringing their energy and courage to some of the most difficult issues we face.”

Mr. Ban said the international community must work to expand “the horizons of opportunity” for young women and men and answer their legitimate demands for dignity and decent work, noting that the global economic crisis and austerity measures in many countries are constraining these opportunities.

In the aftermath of the economic crisis, the youth unemployment rate rose from 11.9 per cent to 13 per cent from 2008 to 2009, the largest annual increase on record – with around 81 million unemployed young people.

“Failing to invest in our youth is a false economy,” he stated. “Conversely, investing in young people will pay great dividends for all.”

The meeting is expected to conclude tomorrow with the adoption of an outcome document that calls for strategies to give young people everywhere a real chance to find decent work and urge countries to take effective measures to protect young people from terrorism, among other elements.