Morocco World News
Home Culture Arab Leaders to Youth: You Cannot Find a Job, but You Can... 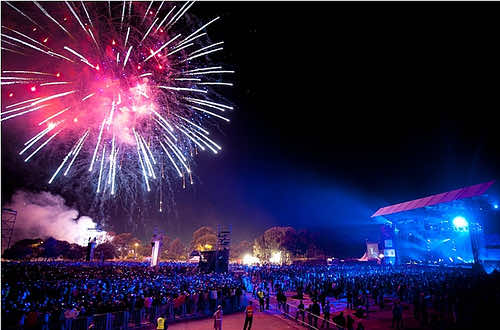 This has been the policy of many politicians and leaders in the Arab world: keep the people distracted, give the young people something fun to do. Get them excited about it, bring them into that stadium and bombard them with propaganda about the most awesome leader and his patronage for the arts and how much he specially cares for the youth. Another purpose such concerts serve is that they are marketed as a tourist attraction, when in reality little or no tourists attend such events. For many, concerts are luxury but it seems the poor in some Arab countries can enjoy them free of charge.

That’s why I was not surprised when Jordan’s premier music festival, Jarash Festival of Culture and Arts, made a comeback this year. It has been away for four years due to some politics, corruption charges, and controversies (read more here). But as the youth of Jordan start to get rallied up about their government, and as the protests gain momentum, suddenly the Jarash Festival makes a comeback.

I guess the government figured if they book all those stars the youth like, then those youth won’t do anything that would cause the festival to be canceled. Also the festival makes it easier for the state security to take over the town for the duration of the festival. This summer Lebanese diva Najwa Karam and colorful composer Melhim Barakat will appear on this historic stage.

Morocco this year had the biggest names in Arabic entertainment perform, distributing millions of tickets. The biggest concert had 100 thousand attendees. At Mawazine, household names like Shakira, Amr Diab, Nawal Al Zoghby, Carole Samahe, Katehem Al Saher, Hussein Jasmi and others performed at the festival (for coverage read here, here, and here). Never in the history of the festival had they ever had such a star-studded program. No wonder very few people protested, they were busy at the biggest Arabic music festival for this year, brought to them courtesy of their government using money the people never saw.

There is an ongoing effort to stop a number of Lebanese singers from singing in an Algerian music festival. There are two festivals in Eastern Algeria, the Temqad and Jamaliah music festivals. But those concerts have generated so much negative news due to a large campaign to block those A-list pop entertainers under the banner “We Don’t Want Raunchy Entertainers in the land of a Million martyrs.” Pretty strong words, don’t you think? There are a lot of financial concerns, as politicians spend lavishly on those events in the hopes the youth will forget about the lack of jobs and meaningful education. The people behind the has produced a movie exposing the organizers of such festivals (You can watch here). At this time, there are 30 thousand fans of this Facebook page urging the cancellation of the music festival.

The Palestinian Authority in Ramallah brought the Palestine International Festival this year to the city of Ramallah where it has always been held. While the government is unable to pay its employees, nor are they able to have a functioning economy in most West Bank cities, nothing can get in the way of a good party. This year’s music festival had a number of performances from the Arab world and beyond. Spain, Chile, Algeria, Jordan and Egypt sent their best and brightest entertainers to take part of the festival (coverage here). This year’s festival made a lot of headlines because invited Tunisian singer Latifa turned down the invite because she did not want an Israeli stamp on her passport. The organizers, however, worked around it and this year the artists did not get an Israeli stamp to decorate their passports. I think the whole message of this festival is to engage the youth and give them an illusion that they have a life, when indeed much of the local economy is crumbling.

Many of these concerts have taken place in other Arabic countries as well. The only countries where large music festivals were canceled are Tunisia and Egypt, the two Arab countries that threw the bums out of office. The message that those tow government has sent is the following, “Get back to work people.” On the other hand, Damascus is gearing up for a huge music festival to shore up support for the Assad regime. Only those who have fiercely defended and sang for him are invited to perform. Critical voices have either been murdered or have been discredited.

As someone who appreciates music and blogs about it very often, I have concerns with those festivals that are marketed heavily to increase the popularity of a leader who is unable to provide jobs, but is able to give you a ticket for some dazzling concert. As the summer reveals, the Arab rulers are hell-bent on dancing till the music stops. A painkiller of sorts, but ultimately those things do not work forever. There are real problems in those countries that not even the A-list Lebanese singers can address. Leaders should lead by creating jobs, not throwing parties and becoming concert promoters.