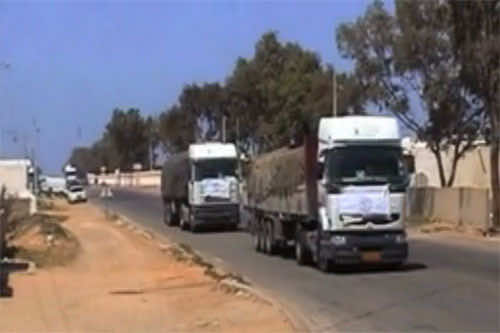 United Nations humanitarian agencies said today that they have identified areas of the Libyan capital, Tripoli, where residents urgently need humanitarian assistance, including medical treatment for injuries caused by the ongoing conflict in the North African country.

“Although the mission observed aspects of normalcy in Tripoli, members identified pockets of vulnerability where people need urgent humanitarian assistance,” said the acting UN Humanitarian Coordinator for Libya, Laurence Hart, in a press release following the conclusion of the mission on Saturday.

The assessment mission, the fourth to Tripoli since the beginning of the crisis, was intended to further look into the needs of internally displaced persons (IDPs) and other vulnerable groups, and to ensure that they received assistance. The mission also assessed the humanitarian impact of the conflict on civilians.

The health sector is under strain, having lost thousands of foreign workers at the beginning of the conflict, according to the press release issued by the UN Office for the Coordination of Humanitarian Affairs (OCHA). Medical supplies, including vaccines, are rapidly running low, and the mission received reports of heavy psychosocial impact of the conflict, mainly on children and women.

Although basic food items are available in the markets, prices are rising and there are concerns over the sustainability of supplies into the city especially as the holy month of Ramadan approaches, if the conflict persists.

Outside Tripoli, the team also visited Al-Khoms and Zletan, east of Tripoli and close to the frontline, as well as Gharyan, in the Western Mountains area. All those towns have seen a significant influx of IDPs.

Fuel shortages have become a pressing problem, and the UN team observed long queues at gas stations, some of which had closed down. A fuel consumption quota system is now in place since, and Libyan oil trade experts warned that fuel stocks could run out in two weeks. Public transport costs have tripled, making access to services, including hospitals, challenging.

Reduced availability of cash is also a serious concern because many Libyans withdrew their savings from banks at the beginning of the crisis. Banks are restricting cash withdrawals for individual account holders.

The mission, which was made up of representatives from OCHA, UN Population Fund (UNFPA), UN High Commissioner for Refugee (UNHCR), UN Children’s Fund (UNICEF), UN World Food Programme (WFP), UN World Health Organization (WHO), as well as staff from the International Organization for Migration (IOM), reported that water is still available, but people are experiencing significant power cuts.

Libya has been engulfed by fighting since a pro-democracy movement opposed to the regime of Muammar al-Qadhafi emerged in February following similar protests in Tunisia, Egypt and other countries across North Africa and the Middle East.

Meanwhile, the Special Envoy of the Secretary-General for Libya, Abdel-Elah Al-Khatib, today held talks in the city of Benghazi with members of the Libyan National Transitional Council (NTC) in his continuing efforts to find a political solution, the office of the spokesperson of the Secretary-General said in a note to reporters. Mr. Khatib is expected to visit Tripoli tomorrow for further discussions with officials there.