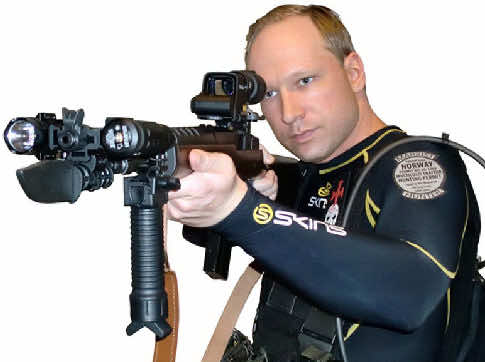 Last Friday’s terrorist attacks by Anders Behring Breivik against Norway’s central government district and a political youth camp of the Labor Party targeted not only the Norwegian political system but the very idea behind Norway’s multicultural society and, in particular, the place of Muslims within it.

Muslim immigrants, mainly from Morocco, Pakistan, and Turkey, first began arriving in Norway in the late 1960s and early 1970s in search of employment. Norway did not actively recruit Muslims, as Germany and other European countries did, but the arrival of these so-called guest workers coincided with a growing need for labor. Although the Norwegian government halted work-related immigration in 1975, immigrants continued to arrive throughout the next decade by seeking family reunification and political asylum from oppressive Muslim-majority countries. During the 1990s, Norway welcomed a large influx of Muslim refugees from various conflicts, including the Gulf War and the struggle in the Balkans that followed.

The Muslims in Norway are highly diverse, hailing from a wide range of geographical and religious backgrounds. Norwegian Muslims seem to have integrated more effectively and in less time than Muslims in other Western European countries. They have close relations with other minority groups and are engaged in the society at large. They are active in the country’s political parties and cover the entire political spectrum, but tilt toward the ruling Labor Party because its socio-economic positions benefit them more than other parties’ policies do. As in most other Western European countries, Muslims in Norway are typically middle-class or lower, but an increasing number of them are entering higher education. There are now more than 100,000 Muslims in Norway and over 100 mosques, making the Norwegian Muslim community small but vibrant by European standards.

The growth of Norway’s Muslim community has created tensions with the country’s native population. In recent years, some non-Muslim Norwegians have raised concerns about the Muslim traditions of circumcising newborn males, slaughtering animals according to Islamic dietary laws, and, for women, wearing a hijab. These practices, not native to Norway, have been exploited by Norway’s right-wing parties to feed fears of a Muslim encroachment on the country’s way of life. In the election campaign of 1987, for example, the leader of the right-wing Progress Party, Carl Hagen, publicized a purported letter from a Muslim citizen that foretold a Muslim takeover of Norway. The letter was later proven to be a forgery, but the party enjoyed unprecedented success in those elections. It has used anxieties about the Muslim community to its advantage in several elections since then.

The Gulf War sparked further suspicions about the Muslim community. Norway’s participation in the U.S.-led coalition against Saddam Hussein led some Norwegians to see Muslims as a disloyal fifth column. Norwegian journalists discovered that the State Bank had fired Muslim cleaning staff because it saw them as a security risk. Several years later, during the Bosnia conflict, there were calls from in Norwegian newspapers to support the Serbians, arguing that they were defending Europe from Islamic conquest. Anti-Muslim sentiment in Norway reached new heights after the 9/11 attacks. Suspicion of the Muslim community spread from the right-wing fringe to the political center. A politician from the Christian Democratic Party proposed banning Muslims from broadcasting the Islamic call to prayer in public. Another former parliamentarian for the Conservative Party wrote a book in which he accused Muslims of trying to take over the country by deliberately increasing birthrates.

Whereas previous verbal assaults on Muslims were often nakedly racist and antiquated, referencing the old “Muhammadan” threat to conquer Europe, a more sophisticated bigotry against Muslims has emerged over the last several years. The anti-Muslim rhetoric does not make reference to race or color but instead turns to Muslim scripture to find passages to show that Islam is an evil religion. Critics of Islam also cite former Muslims who have left the community and now call it dangerous. Those who accept these claims without questioning them or attempting to find out more become scared that Muslims are aiming to overtake Norway.

These more insidious attempts to raise fears about Muslims are often part of a broader critique of Norway’s multicultural society. Critics of Muslims argue that multiculturalism has failed and point to the Muslim community as the reason for its failure. For example, Christian Tybring-Gjedde, the leader of the Progress Party in Oslo and a member of the National Assembly, wrote in a recent op-ed that the Norwegian government has stabbed Norwegian culture in the back by importing “multiculture.” He and others condemn Muslims for failing to integrate properly and see a multicultural society, which allows Muslims to keep their traditions, as a policy designed by the government to eradicate Norwegian culture.

Anonymous forums on the Internet have allowed anti-Muslim bigots to connect and reinforce each other’s worldview. Breivik participated in many such forums and wrote about a coming war in Europe to remove Islam and Muslims from the continent. Indeed, there are several Norwegian anti-Muslim groups on the Internet, including Stop Islamization of Norway. The most successful entity is the blog document.no, which combines a conservative outlook with criticism of Islam. Breivik was active commenting on the blog, but felt that while he shared its worldview, it failed to promote violence. As a result, he embarked on his own mission.

Despite this anti-Muslim turn in Norway, the country’s political establishment has sought to promote dialogue with the Muslim community, including Muslims in hearings in the policymaking process. The government also funds an inter-religious council that addresses and advises regarding policies that affect religious minorities.

Anti-Muslim voices have strongly criticized these outreach efforts. The current leader of the Progress Party, Siv Jensen, has argued that these efforts permit the creeping Islamization of Norwegian society. “The reality,” she said, “is that people are now in the process of allowing a form of sneak-Islamization in this society and we must put a stop to that.” Jensen sees any concession given to Muslims as proof of the Muslim takeover. Although her party does not condone violence, its anti-Muslim rhetoric encourages hatred, which can breed violence.

In the aftermath of the attacks this past week, it was feared that Norway would move increase security and perhaps pass a law similar to the Patriot Act in the United States. Yet instead of demanding more control and greater security, the country’s political leadership has participated in large public meetings with minimal security, sending the signal that Norway will not let terror dictate the country’s behavior. And when initial stories about the attacks last week implicated Muslims, the Norwegian media did not jump to conclusions. These are early and encouraging signs that Muslims will continue to integrate and feel welcome in Norway.