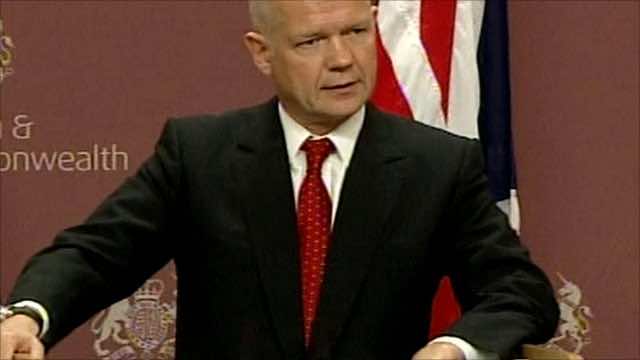 All Libyan diplomats have been told to leave the UK as part of efforts to show Col Gaddafi his “legitimacy has come to an end”, William Hague has said.

He said Gaddafi-regime embassy staff were being expelled and the rebel National Transitional Council (NTC) invited to take their place.

The foreign secretary said the UK now recognised the NTC as the “sole governmental authority in Libya”.

Libyan ambassador to the UK Omar Jelban was expelled in May.

Libyan rebels and pro-Gaddafi forces are still locked in battle, five months after an uprising began against Muammar Gaddafi’s 42-year rule, as Nato continues to enforce a UN-backed no-fly zone over the country.

At a press conference on Wednesday, Mr Hague said the NTC had shown its commitment to a “more open and democratic Libya… in stark contrast to Gaddafi whose brutality against the Libyan people has stripped him of all legitimacy”.

He said the UK would now deal with the NTC “on the same basis as other governments around the world” – and as a result the Libyan charge d’affaires had been summoned to the Foreign Office to be told all Gaddafi regime diplomats must now leave.

It is thought that eight Libyan diplomats remain at the embassy in Knightsbridge.

The UK embassy in Tripoli suspended operations in February.

This week Mr Hague suggested Col Gaddafi may not have to go into exile should he leave power – saying it was a “question for the Libyans”.

Asked about reports all remaining diplomats were due to be expelled, a spokeswoman at the Libyan embassy told the BBC she had not heard that adding: “We have no response at the moment.”