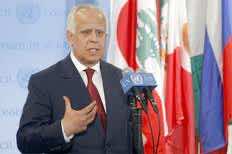 New York (UN) -Morocco has expressed, before the UN Security Council, its “deep concern” over the Middle-East deadlocked peace talks.

Morocco is “deeply concerned by the impasse which international and regional efforts aimed at reviving direct negotiations between the Palestinian and Israeli parties have reached,” Morocco’s Permanent Representative to the UN, Ambassador Mohamed Loulichki, said on Tuesday.

He urged the international community to show “strictness and efficiency” to create an environment propitious for the resumption of negotiations and avert that unilateral actions by Israel hamper them.

Peace talks have stalled since last September because of Israel’s refusal to renew the freeze on settlement-building on the Palestinian territories.

Expressing concern about the obstacles impeding the resumption of peace negotiations, Loulichki noted that this concern “is matched only by our firm conviction that the peace process is a choice that will lead to a comprehensive and just peace which guarantees the legitimate rights and security of countries in the region.”

“Morocco follows with optimism the various initiatives by the United States, the Quartet and the European Union in this regard,” he said, hoping that these efforts will contribute to the resumption of negotiations “on the basis of international legality, the Arab peace initiative and the roadmap.”