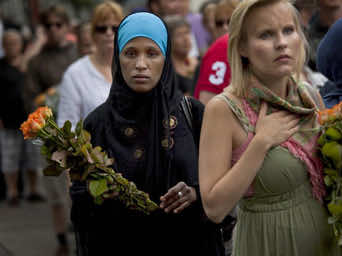 I never thought I could be converted. But Norway’s loss of 93 victims has made me think about the death sentence and how the arguments for bringing it back seem to be stronger than ever. We are living in an era of liberalism both in the north (Europe) and further south in the Arab world where it seems inconceivable to put a man to death for any grotesque criminal act. But if the state takes full responsibility for Norway’s loss, then it has to presume that Anders Behring Breivik’s actions simply would not have been carried out by him, if he knew he would face the death sentence. Norway should now be thinking about deterring others from following this maniac and his perverse course of making himself a media and Internet sensation, regardless of whether we acknowledge him to be a “right wing” or “extremist” freak or not.

It’s all about the media story that follows the massacre, and the role of journalists. But above all, it is about how governments from these extreme “liberal” countries act to prevent a repetition.

It’s a similar story in Morocco, my adopted home country. In April 2011, a young man from a sleepy port town of Safi traveled to Marrakesh and planted a huge bomb in a tourists’ café – which he detonated at a long distance with a mobile telephone killing 20. Since the day of his arrest he has maintained a smugness about his actions which really makes my blood boil and made me start to think that European governments in tandem with Arab neighbors need an act of extremism in itself to combat this latest fad.

There is a link between both Marrakesh in April and Utoya in Norway which raised an obvious point: simply, how can we deter our societies’ insane from immortalizing themselves in the annals of history, following gruesome acts like these when we don’t have the “extreme” laws in place?

Don’t we need an international convention on common sense, brainstorming about how to stop this new breed of lunatic – the one whose bigger plan is to stick around and be caught, then be made a media sensation for years, possibly decades to come, with TV deals, a film and books to follow.

Would Adil El Atmani have gone ahead with this abysmal act if instead of being made a martyr or some kind of media icon – and certainly a hero of the Jihadist movement – he would have to face the electric chair? Would Breivik gone ahead with this biblical act of horror, which involved shooting children at point blank range, if he knew that he would be given the same death, with the same method (being fired at with an assault rifle) more or less immediately after being found guilty? I doubt it.

Would the world be shocked if a Norwegian court ordered a death sentence by firing squad?

It is not remotely relevant that he revered UK right-wing figures such as Melanie Philips who writes a Daily Mail blog and sought some comfort from it nor that he hated Muslims. What the media are doing at the moment in the UK and across Europe is muddle the issue with sensation and gore, whereas it should be focusing on how his story is going to be portrayed and how his character is going to become a macabre legend, worthy of endless attention, which can only mean inspiring others to follow suit.

Both these acts of terrorism made me think of why I never believed in the death sentence, which takes me back to when I used to live in Kenya. In this former British colony, when thieves come to rob your house, they wait for you to be in. It is of no purpose for them if you are not there as their aim is to torture you to let them know where you are supposed to have left the stash of money which all Kenyan thieves believe Europeans and wealthy compatriots keep in their houses. In all cases, after torturing the victims, they kill them without exception. The reason? To eliminate the slightest possibility of being identified later and then facing either the death sentence or a 10-year prison sentence in a jail – which is a death sentence in itself, no mistake.

Logically in the Kenyan scenario, clearly the death sentence deterrent doesn’t work. Yet in the Arab world at least, where some countries actually practice death sentences – certainly brutal forms of corporal punishment – the argument for stringing up these sick nuts is a strong one. Whether Arab world or farther north, we have not combated this new, modern freak form of terrorism – the most cowardly of its kind. But if governments and civil society don’t create a deterrent which hits back twice as hard, we can certainly expect more of it. And finally a debate of capital punishment will follow.

The north needs to show its voters that their governments are working on a solution to reduce the risk of more extremist carnage descending on them, which just feeds the debate about immigration (from the Arab world) and leaves only the racists as winners. The south too could show Europe that is it serious about lunatics like El Atmani hijacking Islam for misguided profit as such extremism needs to be tackled. A death sentence for terrorists in Arab countries doesn’t seem extreme enough though, but it might be a good start.